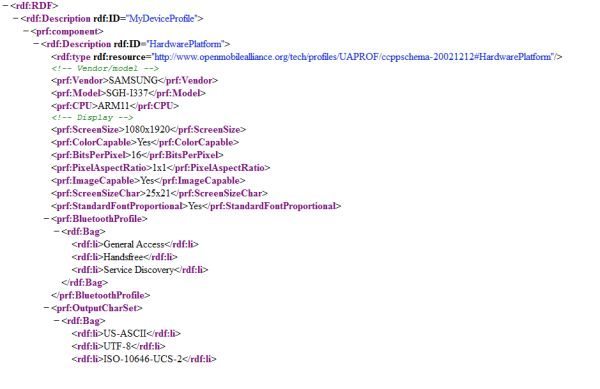 The big Samsung Galaxy S4, the smartphone that is a mystery that have us all on the edge of our seats, this Android handset is going to be the successor to the Galaxy S3 and we are digging for as much information as we can possibly find. When the Samsung Galaxy S3 was released on the AT&T network it was known as the SGH-I747, and now according to the User Agent Profile aka UAProf is showing a new Samsung model aka SGH-I337, could this really be the AT&T variant of the new Galaxy S4?

If you look at the screenshot above taken from Samsung Mobile UAProf the model number shows SGH-I337, which suggests the handset, will be released on AT&T. It also shows the display being 1080 x 1920 otherwise known as Full HD resolution; this surely belongs to the Galaxy S4, does it?

We have also learned that the global version of the Samsung Galaxy S4 will be model number GT-I950X, there has been so much rumoured information on this handset and we have been here right when it all begun. We reported not so long ago that the Galaxy S4 could make its appearance at the Samsung Unpacked Event on March 22 and not MWC 2013, an expected April 15 release date has been suggested as well.

In the Android world other than waiting a lifetime for Google Play to get more Nexus 4 stock in, there are two names that stand out from the rest, one being the Samsung Galaxy S4 and the other being the Note 3 — What one do you want?

The global Samsung Galaxy S4 will acknowledged as the GT-I950X, it is strong to say that the SGH models are known for AT&T. The UAProf report is not solid evidence as of yet because no official confirmation has been announced, so this one is the “Take with a pinch of salt” for now.

It would be superb if the Samsung Galaxy S4 came with these specs at least, 1.8GHz Exynos 5 Octa CPU, 4.99-inch Super AMOLED full HD display, 2GB of RAM, 440 ppi, as well as a 13-megapixel rear camera, 2-megapixel front-facing camera, Android 5.0 Key Lime Pie and a 2600 mAh battery. Wireless charging would be a great feature to include, as well as the stylus being built-in like the Galaxy Note 2.