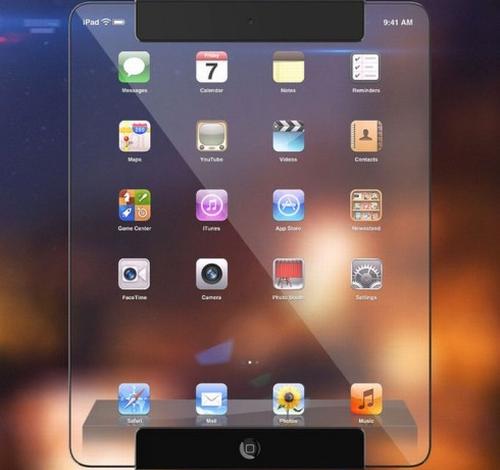 The Apple iPad has been with us in its many guises for almost three years now and the device has seen quite a few changes, with the iPad 4 being the lightest and thinnest model yet away from the iPad mini. With any Apple product we get to hear rumours and speculation about what the next model will bring, and today we have a transparent Apple iPad concept for you.

We often get to see a variety of concept smartphones, but designer Ricardo Alfonso has come up with this gorgeous iPad concept with its futuristic design. It is not known if this is a concept for the full sized Apple iPad or the smaller sibling iPad mini.

The device would be completely manufactured from glass except the top and bottom parts, which are made from a metallic material to place the home button, and front facing cameras. There would be a problem with this tough as it’s hard to see where the internal components such as the processor and battery would be placed.

Unless they could be housed behind the metallic parts but the battery would surely be too big to go here, but there would be the costly option of placing components between the sheets of glass with cameras reproducing the image around them thus making it look transparent.

Thoughts have been turning to the iPad 5 recently with talk the device looks similar in design to the iPad mini, but obviously it would be too soon to see anything like this in this year’s iPad model. We have embedded a video below of the concept iPad. Source: Concept Phones.

What do you think of this iPad design?