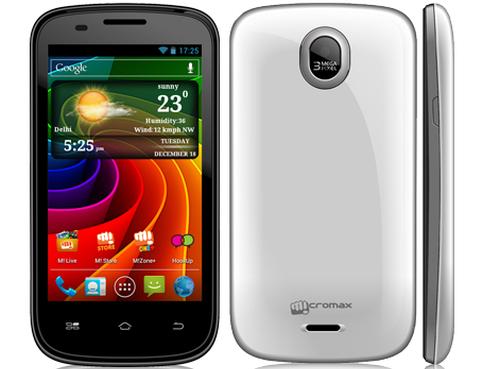 The team here on Phones Review like to keep our readers in the Indian market up to date with the news regarding handsets that become available in the region, and today we have news of the Micromax A89 Ninja that continues the company’s great Android Indian strategy recently of releasing a huge number of handsets.

The company spent 2012 releasing handset after handset and has already got this year off by launching the 5-inch A116 Canvas HD, and has revealed plans to release more than thirty Android handsets this year alone.

This latest handset is the A89 Ninja that joins the company’s other Ninja smartphones and features a 4-inch TFT capacitive touchscreen display with a 800 x 480 resolution, which is powered by a dual core Mediatek MT6577 processor clocked at 1GHz. Other internal components include 512MB of RAM and 2GB of on board storage that is expandable further up to 32GB thanks to the microSD card port.

It comes running the Android Ice Cream Sandwich operating system, and there is also a three megapixel rear facing camera, dual SIM card support, and a 1450 mAh battery supplying the juice. Connectivity wise there is Wi-Fi, 3G, Bluetooth 2.1, and a USB port. The device is also capable of 720p video playback and there is also a 3.5mm audio jack, along with a FM Radio.

The handset is aimed at the mid-range market and this is reflected in the price that is set at Rs 6,190 from online retailer Infi Beam. For more information head over to the Micromax website here. Do you own a Micromax smartphone?

One thought on “Micromax A89 Ninja, the great Android Indian strategy”