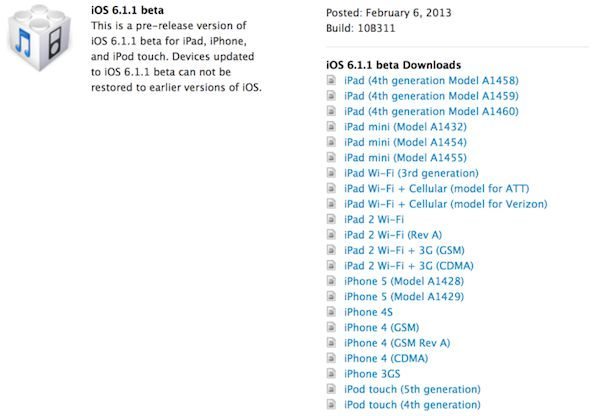 iOS 6.1 was only released to the public last week and already they have a new release for devs, today Apple released its new iOS 6.1.1 beta version 10B311 to developers and there is more than just one reason why. We believe it is to kill the new evasi0n iOS 6.x jailbreak, which we all know is illegal, and MuscleNerd tweeted and quotes “6.1.1 beta is already out to developers! Obviously stay away from that.”

Apple released the iOS 6.1.1 notes saying that this is a pre-release version of iOS 6.1.1 for iPad, iPhone and iPod Touch. Devices that update to this will not be able to restore to earlier versions.

6.1.1 beta is already out to developers!Obviously stay away from that.

If we find any more information on the new iOS 6.1.1 beta for developers we will let you know, those that used the new evasi0n jailbreak will know from experience that this new beta will probably kill it.