iPhone 5S may finally match Android via quad-core A7 chip 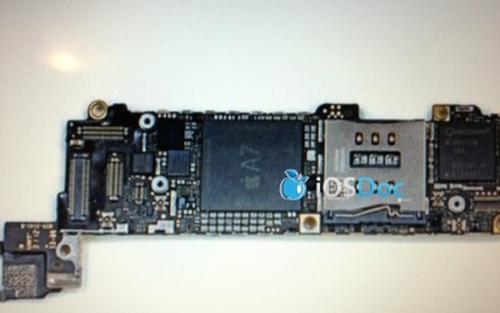 There are many that believe that Apple has fallen behind the competition slightly after the last two iPhone releases, as the Android platform has seen larger displays and more powerful processors packed into handsets. While having a more powerful processor is not the be all end and end all in the smartphone world, the iPhone 5S may finally match Android via a quad-core A7 chip.

Only yesterday we heard Apple could be using a new type of display on the iPhone 5S for markets such as China, but now an image has emerged courtesy of iOSDoc that can be seen on this page, which is seemingly of the upcoming A7 processor that would be found in the next iPhone.

The motherboard looks to be of a similar size to what the current iPhone model uses, so strengthens earlier reports that believe that the iPhone 5S won’t be seeing much of a design change. It seems the iPhone 5S may come equipped with a quad core A7 processor that is clocked at 1.2GHz, and running iOS 7.

It is also being claimed the A7 chipset will feature the PowerVr quad core SGX554MP4 graphics chip that made its debut inside the iPad 4. There should also be 2GB of RAM if these claims are true, and while the sources don’t talk specifically about the architecture used for the A7 chip, you could speculate it would use A15 cores.

If these specs run true the A7 chip will still be trailing behind the likes of the Samsung Exynos 5 Octa, Nvidia Tegra 4, and the offerings from Qualcomm. Obviously this is only rumours for the time being and having a more powerful processor can seriously affect battery life on a smartphone, but upcoming chipsets have been designed to be more energy efficient, and the iPhone itself hasn’t escaped complaints about battery life.

Will you be giving the iPhone 5S a miss this year if rumours about the handset are true?