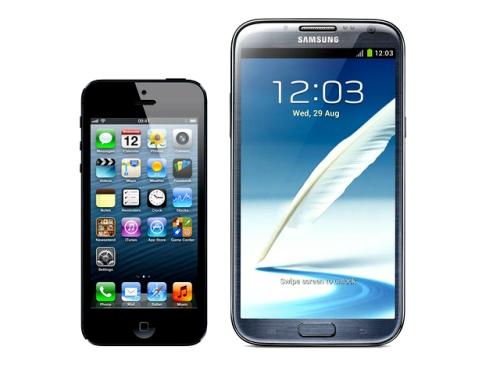 Whether you are a fan of Apple or not the company undoubtedly changed the smartphone market for the better with the release of the original iPhone back in 2007, but fast forward six years and things have changed dramatically and the company now has a lot of competition. Fierce rival Samsung now poses a real threat to Apple’s reign in the smartphone world and when looking at the iPhone vs Samsung Galaxy, it could just be a case of status symbol over function.

We recently reported that both the iPhone 5 and the 4S outsold the Samsung Galaxy S3 during the fourth quarter of 2013, but many will argue that Apple could release any old handset and as long as it had the companies badge on it people will buy it. Trouble is the last two iPhone releases have come under fire from once big Apple fans that have been left disappointed in the features and specs of the handsets.

There are many that favour larger screens on a smartphone and even a couple of years ago Android handsets broke the 4-inch barrier, which Apple has only just reached with the iPhone 5. This is not all about knocking the iPhone though as it arguably has an ecosystem that is still unrivalled, but that’s not to say it hasn’t had its own issues.

The Samsung Galaxy Note 2 and Galaxy S3 have become firm favourites among many smartphone fans, with even some of our own readers switching platforms in favour of the handsets. There is no doubt in the early years of the iPhone people saw it as a status symbol when telling people they were lucky enough to own one.

There have been a lot of complaints about the latest model and issues with the constant chipping of the finish, and while many prefer the metal casing compared to the plastic used on the Galaxy range, chipped paintwork is not a good look on any product let alone a Â£500 smartphone.

The Galaxy handsets now have innovative features that are not available on the iPhone, which at one time it was always Apple that provided the wow factor at each new smartphone unveiling. One thing the iPhone still wins on is software updates, but Android is catching up especially with Nexus hardware.

There will obviously be users in both camps that will swear that their device is better than the other, which is similar to the long standing Xbox and PlayStation argument. When you see the handsets side by side you realise how old the iPhone seems compared to rivals, and knowing Apple they will eventually come up with something really special, but they better not be too long about it.

Have you recently ditched the iPhone for something else?

3 thoughts on “iPhone vs Samsung Galaxy, status symbol over function”