Nexus 4 on T-Mobile now free, need to be quick 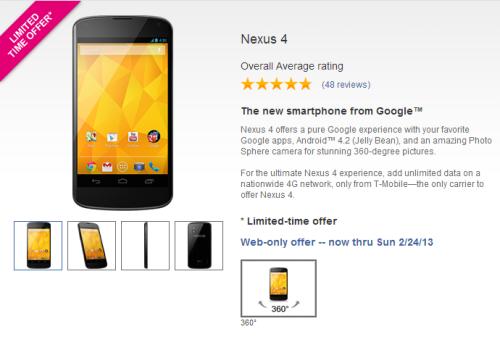 Since the handset was first released most of the news about the Nexus 4 has been about the lack of availability of the device via the Google Play Store, but the smartphone has been available via a number of carriers although with a two year contract, and now the Nexus 4 is available free on T-Mobile but you need to be quick.

A while ago T-Mobile were offering the Nexus 4 for only $50 after a mail in rebate, and now the carrier has gone further by offering the handset free of charge after another mail in rebate. There is one catch though as the offer is only available this weekend so will end tomorrow.

Obviously this is on condition of a new two year contract being agreed too, so consumers will still be better off if they can afford to pay the price on Google Play to get hold of the handset outright, but not everyone can afford to splash out that amount of cash in one go.

The offer from T-Mobile is an online only deal and will still need an initial $50 paid out on the day of purchase before you get a mail-in rebate card, so will eventually become free. You will still get the same Android 4.2 Jelly Bean running smartphone that has a 4.7-inch touchscreen display powered by a quad core processor clocked at 1.5GHZ.

If you want to take advantage of this great offer head over to the T-Mobile website here.

Are you going to get the Nexus 4 from T-Mobile this weekend?