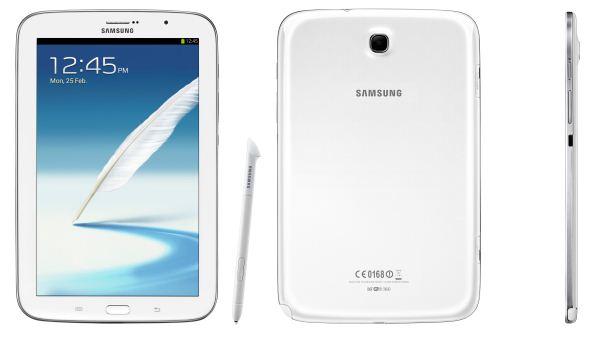 It seems that Samsung has set its sights on the iPad mini with its latest device that is basically a stretched Galaxy Note 2, after the company officially revealed the specs for the Samsung Galaxy Note 8.0 tablet PC that will also allow you to make phone calls.

Just before the MWC 2013 event kicks off tomorrow Samsung decided to show off their new tablet early, or phablet in some people’s eyes. The device will feature the S Pen that is already found on the Note 2 and Galaxy Note 10.1 along with a number of other features.

The new device is using an 8-inch WXGA display with 1280 x 800 resolution and 189ppi pixel density, which is a little disappointing when you consider many mobile devices this year are taking the Full HD route with rumours that a new Nexus 7 is in the works with such a display.

Under the hood is a Samsung quad core Exynos processor clocked at 1.6GHz running the Android 4.1.2 Jelly Bean operating system with 2GB of RAM. It will come in either 32GB or 64GB of storage that can be expanded by another 64GB via microSD card, and camera wise it is fitted with a 5-megapixel rear camera with a 1.3-megapixel unit on the front.

It is also capable of 1080p Full HD video capture at 30fps and connectivity wise it is has Wi-Fi, 3G and 4G LTE options packed into a device measuring 210.8mm x 135.9mm x 7.95 mm weighing 338 grams. The device is fitted with a 4,600 mAh battery and will be available during the second quarter of this year around the world.

The Samsung Galaxy Note 8.0 is also capable of making and receiving phone calls but how you would feel holding a device of this size up against your ear remains to be seen, and we have previously compared the tablet PC based on early rumours against the iPad mini that you can find here.