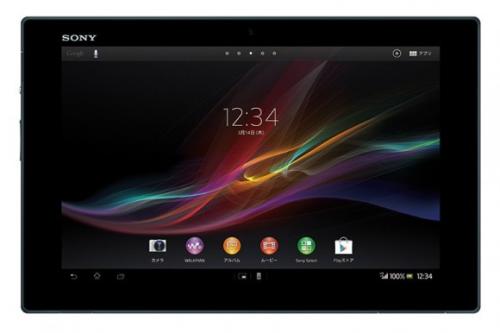 Sony’s attempt at both the smartphone and tablet PC market has been a mixed affair in the past, but the company is showing it really means business in the last few months with appearance of a number of great looking products, and now the Sony Xperia Z Tablet specs and availability have been confirmed.

The tablet has been seen before but now it has been officially revealed at the ongoing Mobile World Congress, and it seems the Sony Xperia Z Tablet will be taking on the competition with regards to specifications and pricing for the device.

It features a 10.1-inch WUXGA display that provides a resolution of 1920 x 1200 and is powered by a quad core Snapdragon S4 Pro processor clocked at 1.5GHZ paired with a nice 2GB of RAM, and is claimed to be the thinnest tablet PC available at only 6.9mm and weighing only 495 grams.

The Xperia Z Tablet is also water resistant in a similar way to the smartphone with the same name, and camera wise Sony have fitted an 8-megapixel camera on the back, while around the front is a 2-megapixel shooter. The device will launch running the Android 4.1 Jelly Bean operating system, but has already been promised to be upgraded to 4.2 Jelly Bean shortly after launch.

There will be up to 64GB of storage on the Wi-Fi model with 32GB on the LTE version, but there is the nice inclusion of a microSD card port to increase this further. The Wi-Fi model is priced at a respectable Â£399 with the LTE version costing Â£499, and Sony is promising the device will be available from the 1st of March.