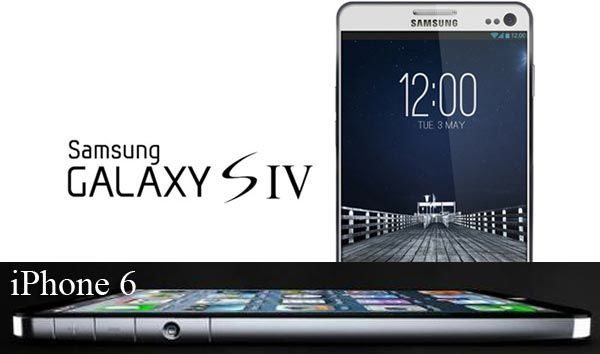 Please do not feel we are forgetting the iPhone 5S because we are not, but can you seriously expect the 5S to be put in the same category as the iPhone 6 and the Samsung Galaxy S4? Of course not! The next generation smartphone aka the iPhone 5S is purely going to be a 5 refresh and nothing more, so please read on about the iPhone 6 vs Galaxy S4 recapping the judgement game.

When it comes to smartphones the two main names that stick out from the rest has to be the iPhone 6 and the Samsung Galaxy S4, yes we have had many reports coming through via emails and sources around the world such as both handsets featuring wireless charging etc, but we want to talk a little more of what we can expect.

Above we mentioned about wireless charging and it seems that the Galaxy S4 could indeed come fitted with Qi inductive charging, obviously this has not yet been set in stone but we believe Apple will do the same for its iPhone 6 just like the technology it uses in its wireless Magic Mouse pad for charging.

We talked recently about the Samsung Galaxy S4 probables vs possibles, and seeing as the Samsung Unpacked event kicks off this Thursday (March 14th) around 11pm UK time it made sense for us to do so, we will let you read about this right here.

Will Apple change its iPhone 5 design with future releases? Well, we will not put our heads on the chopping board but we did recently reported about Apple releasing two new iPhones, one with a 4.2-inch display and another featuring a bigger 4.8-inch, if Apple do decide to go for the bigger option then this could be the one that goes up against the Galaxy S4. Increasing the screen size could do away with the iPhone’s home button, something to be taking with a pinch of salt until an official announcement is made but still worth thinking about.

How about an onscreen trackpad, or using the sides of the iPhone for touch gaming, what Phones Review would love to see is the ability to use the Magic Mouse wireless charger with the iPhone 6, there is nothing stopping the consumer placing their new iPhone 6 onto the mouse pad to charge, is there?

The iPhone 6 would be fantastic if it came with features such as a 12-megapixel camera minimum on the rear, the one feature that was missing on the iPhone 5 was NFC, Apple should not make the mistake and leave this out on the iPhone 6. iOS 7 should come pre-installed, for more information on this operating system please read our iOS 7 wishlist.

The iPhone 6 needs to come with even better HD pictures, in fact add super in front of HD and we are there, Smart Pen stylus, A7 quad-core processor chips, Retina or IGZO display would be a nice touch and a totally new design that proves Apple can re-invent the way the smartphone should look.

When it comes to the Samsung Galaxy S4 and to be ressonable with the specs, one would like to have a 4.99 to 5.2-inch Super AMOLED HD display with 441 ppi, it does not need to be as big as the Note 2 because that will be down to the Galaxy Note 3 to void that gap. The S4 would be a great smartphone if it came with a Qualcomm Snapdragon 600 quad-core processor as we cannot see the Samsung Exynos 5 Octa processor being released on the S4, 1.8GHz to 2.0GHz would be nice as so would a PowerVR SGX 544MP GPU. Other specs: 16, 32 or 64GB options, Android 5.0 Key Lime Pie, 2GB of RAM, TouchWiz Nature UX 2.0 user interface, 13-megapixel rear camera, 5MP on the front, and yes NFC please.

The Samsung Galaxy S4 will all be revealed this Thursday at the Unpacked event and Apple are you listening! “Forget the iPhone 5S and go straight to the iPhone 6 with some amazing features to boot, if you do not then Samsung has yet again beat you on specs, and no doubt sales because the S4 will be one of the most sought after phones of the year. If Apple releases the iPhone 5S and not the 6 this year then changes will happen when it comes to consumers making a decision.

Remember Y-Front underpants? Remember the Commodore 64? Remember the first ever Atari with the Pong game? Would you dump your PS3 or Xbox for the Atari, would you go back to wearing Y-Fronts in favour of your boxer shorts? Of course you would not. This is what we see if Apple releases the iPhone 5 refresh aka the 5S, do the right thing Apple and forget that and go straight to the iPhone 6 with iOS 7.

We have heard that the Samsung Galaxy S4 could be up for pre-order on Friday 15th and go on sale from as early as the first week in April, fingers crossed as they say.