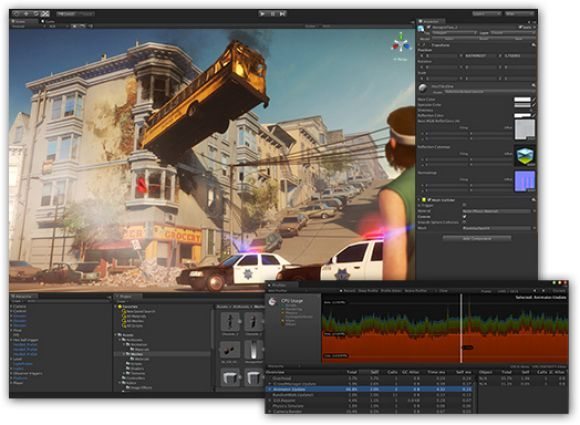 Unity Technologies have just announced that Unity 4.1, the first product cycle release for Unity 4 engine and toolset is now available to download from http://unity3d.com/unity/download/. The first update release for Unity 4, 4.1 is packed with amazing Pro and Free features including support for Apple AirPlay, and is designed so that developers can seamlessly improve game performance and easily create awesome new content.

Memory Profiler
An overhaul of the memory profile tool to make it more powerful so developers know exactly where a device’s memory is going when a game is running. It’s a feature that should have tremendous impact.

AirPlay Support
Unity 4.1 brings developers multi-screen AirPlay support. iOS device users running version 4.3 or later can use AirPlay to stream content direct to their HDTV, and use their iPad or iPhone as a game controller — running and controlling the game from their iOS handheld device whilst watching the action unfold on the big screen.

Mecanim updates
Create your blend trees using fewer nodes and in a more flexible and intuitive way with 2D blend nodes. Use 2D blend nodes to blend animations based on two parameters in a single node.

Shader Updates
Save time with material-specific shader keywords and write less code. Write a shader with a number of different flags that can be enabled and disabled, either via the API or by using the new Custom Material Editor functionality.

For additional details on the new features for Unity 4.1 please see the release notes.