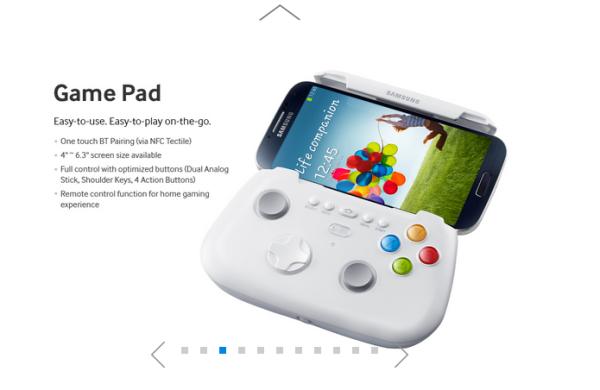 While Samsung launched the new Galaxy S4 yesterday there will be a lot of consumers holding fire on a new smartphone purchase, and instead waiting for the release of the Samsung Galaxy Note 3, but now the company’s own website is hinting the device will feature a 6.3-inch display.

There has been some disappointment among Galaxy Note fans recently when rumours were suggesting the device will come packing a 5.9-inch display, but now the Samsung website that has been put up for the new Game Pad accessory is suggesting it may actually have a 6.3-inch display that has been rumoured before.

The Game Pad was revealed at the Samsung Galaxy S4 press event and is a Bluetooth accessory for Samsung smartphones, but the products description mentions it is for screen sizes from 4-inch up to 6.3-inches. The current model has a 5.5-inch display that was a slight increase over the original Galaxy Note, which was achieved while making the handset physically easier to hold.

With the new Galaxy S4 the company has done something similar and increased the screen size while providing a smaller form factor, and it will be interesting to see if the company can do something along these lines with the next Note release. There have been some rumours recently though that Samsung could ditch the S Pen for the next Galaxy Note, but it remains to be seen if there is any truth in this.

The range of Galaxy Note devices are growing in popularity with many owners now saying they could never go back to a smaller smartphone, and if Samsung is about to launch a 6.3-inch smartphone in the coming months, there will a lot more happy Samsung fans.

Do you hope the Samsung Galaxy Note 3 has a screen of this size?