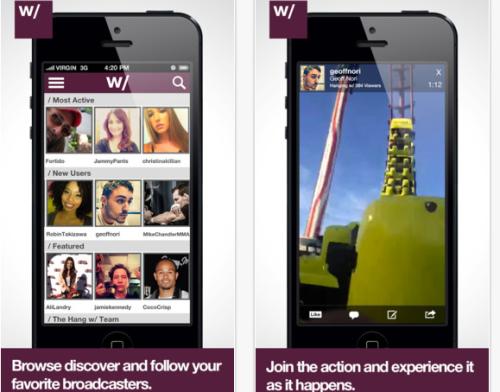 With the huge number of applications that are constantly being released it can often be hard picking out the good from the bad, but today we have news of a new application from MEDL Mobile that looks certain to be a big hit called Hang W/, which allows users to broadcast live video and connect with celebrities.

This great new application has just been released onto the Apple App Store and already has a number of famous users, and the app allows users to quickly broadcast live real time video to multiple devices straight from their iPhone.

The application will see you broadcast video anytime or anywhere you want and you can quickly grow your own fan base, which in turn will gain you some rewards, which will see you get paid a percentage of the advertising revenue generated based upon the amount of views your own personal channel is bringing in.

Every time you go live you can increase your follows to get a larger fan base, and Hang W/ is the only app of its kind to pay users for broadcasting videos. Users can easily find and follow their own favourites and as soon as they go live a push notification will make users aware that the person wants to hang with them.

Users also have the ability to share content directly from within the app to social networking sites such as Facebook and Twitter, which will also help them to grow their fan base. There is an Android version of the app in the works and to download the app yourself head over to the App Store, and check out the video below.