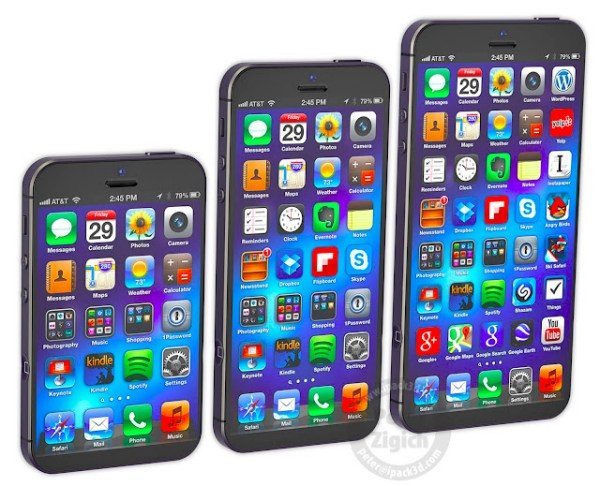 The Apple iPhone 6 may yet be some time away but there is plenty of interest in this smartphone as you might expect. We’ve been bringing you news, leaks and rumors as we hear it and have already heard some details of expected specs and features. Now we have heard that the iPhone 6 could well be powered by Intel processors rather than Samsung’s. Also we take a look at a designer’s imagination of three iPhone 6 models.

We’ll start with the news of reports saying that Intel processors may be used for the iPhone 6 and also a next-generation iPad. We’ve spoken recently about Apple attempting to reduce its dependence on Samsung components for its devices and an existing contract between Apple and Samsung for processors is set to expire next year. Apple is said to be considering Intel as an alternative processor supplier as Intel tries to make headway into the mobile market.

A partnership between Apple and Intel would be hugely beneficial to both parties, giving Intel a major inroad into the mobile market and offering Apple the reassurance that Intel could manage the vast production that would be necessary as it has extensive manufacturing capacity. According to Business Insider a source from either Apple or Intel says that this possibility has been discussed but that nothing has been finalized yet. As you might expect, Apple declined to comment.

Further to this news we have heard that some industry experts are expecting three iPhone 6 models for 2014 although as far as we are concerned it’s way too early to know anything about this as we still haven’t got to the expected iPhone 5S release this summer. However this hasn’t stopped one independent designer coming up with some imaginings for three different iPhone 6 models.

To give us an even clearer idea Zigich has come up with some pricing of around $650 for the regular iPhone 6, $350 to $450 for the iPad mini with the iPhone 6XL coming in at a between $750 to $900. We’ve shown an image above of all three versions of Zigich’s iPhone 6 and you can see more at iPack3d.

Of course we should remind you that these are one designer’s ideas of future iPhone 6 handsets but we have no way of knowing what Apple will eventually come up with. We’d like to hear your thoughts on the iPhone 6. Can you envisage Intel processors in the iPhone 6? What do you think of the iPhone 6 mockups and the possibility of three different models for 2014? Let us know with your comments.