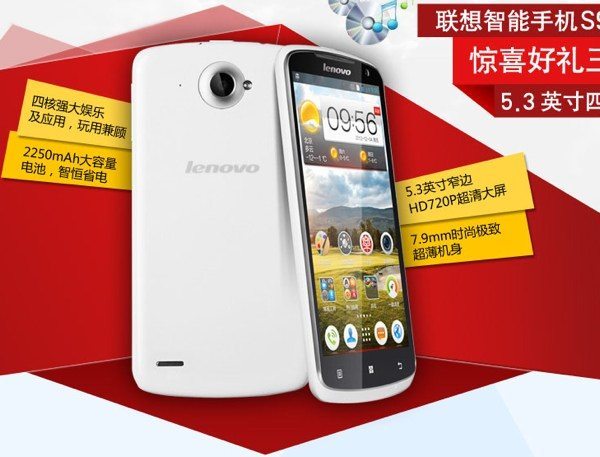 There are some great smartphones releasing at the moment such as the HTC One and Samsung Galaxy S4 and now we can add the Lenovo S920 to the list. This one has a 5.3-inch display though making it more of a ‘phablet’ device, akin to the Galaxy Note 2 and it has specs almost rivaling those of the Note 2.

The Lenovo S920 has just turned up on the Lenovo China website so that we can find out all about it before it releases in China in early April. There’s no word yet on if it will release for other regions or which regions they might be but we do at least have some specifications detailed.

This smartphone phone looks as though it’s the first from Lenovo that will launch on Android 4.2 Jelly Bean, is powered by a 1.2GHz MediaTek MT6589 quad-core processor and has a 5.3-inch HD display with resolution of 1280 x 720. Specs also include 1GB of RAM, microSD support, an 8-megapixel rear camera, 2-megapixel front-facing camera and 2250 mAh battery.

It’s a decent enough looking handset as you can see above and nicely slim at only 7.9mm thick. There’s no official word on price yet but the more affordable MediaTek processor is likely to make it less expensive than the Galaxy Note 2. We’ll be keeping tabs on the Lenovo S920 and will pass on more details to readers as we hear news.

Does this look like a phone that would appeal to you? If you’re not in China are you hoping this Lenovo phone also comes to your region? Let us know with your comments.