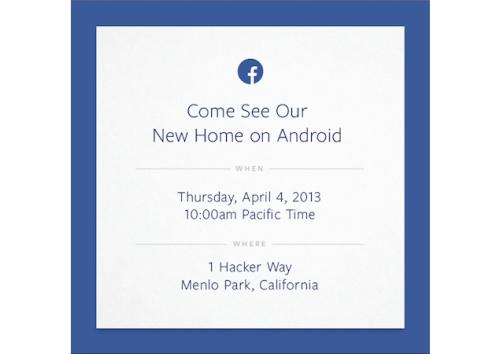 We have already seen a couple of mid-range smartphones that came with a dedicated Facebook button, but there have long been rumours that a more integrated handset will eventually become available. Now a HTC Facebook phone release possibility is growing with some invites the company has sent out for an event early next month.

Back in February some specs were leaked for a handset going under the name of HTC Myst, and then earlier this month some more details about the handset came to light and what is thought to be a Facebook smartphone. Now Facebook has sent out some invites for a press event taking place at the company’s HQ on April 4th, which is inviting us to “Come See Our New Home On Android”.

Sources have told TechCrunch that a device believed to be manufactured by HTC will come with a heavily modified version of Android, but with deep Facebook integration will be making an appearance at the event.

There have been rumours going on for a number of years now suggesting that the social networking giant will offer such a device, and this handset will according to sources will have lots of Facebook functionality built into the Android operating system.

Facebook has recently been expanding the features on its Messenger application that now allows users to make calls from within the app via an Internet connection to other users, which also works across platforms. If these rumours are accurate it would allow Facebook to have greater control on apps as well as the overall user experience of the handset.

Previously though CEO Mark Zuckerberg has denied getting into the mobile phone business, but this deeper control would allow the company to collect far more information on how its users act, which in turn may allow them to further target users with specific ads and features.