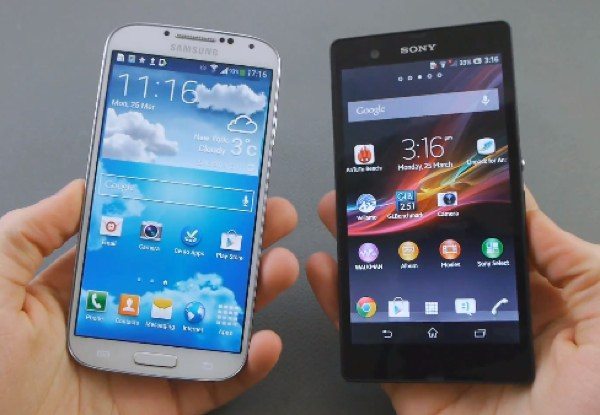 From time to time we like to give readers a comparison between two of the newest devices in a bid to help readers decide which of the two might be the best choice for them. Today we’re looking at the Samsung Galaxy S4 vs. Sony Xperia Z in a flagship fight out, as both of these notable Android smartphones have a lot to offer.

The Sony Xperia Z is already available across different regions of the world and on multiple carriers while the Samsung Galaxy S4 is due for a release across the world from late April. It looks as though the Galaxy S4 will hit the UK first on April 26 and then will also then release on multiple US carriers with T-Mobile being the first to announce availability coming on May 1. We’ll look at some of the key specs and details for each phone first, followed by an overall summary.

Operating System
Android 4.2.2 Jelly Bean will be the OS for the Galaxy S4 out of the box with Samsung’s TouchWiz UI also evident. The Xperia Z released on Android 4.1.2 Jelly Bean and there’s a planned upgrade to 4.2. It also uses the Sony Bravia Engine 2.

Dimensions and Colors
Measurements of the Galaxy S4 are 136.6mm x 69.8mm x 7.9mm and it weighs 130g. It comes in White Frost or Black Mist color options but more colors may arrive later, as in the case of the Galaxy S3. The Xperia Z measures 139mm x 71mm x 7.9mm, weighs 146g and has black, white or purple color options.

As you can see these two phones are pretty similar when it comes to specs with only some minor differences between them. They both also have LTE connectivity (on models where applicable), Bluetooth 4.0 with AD2P and NFC although the Xperia Z has Wi-Fi 802.11 a/b/g/n and the Galaxy S4 has the superior Wi-Fi 802.11 a/b/g/n/ac. However the Xperia Z is both water and dust resistant, something that the Galaxy S4 lacks.

Of course we haven’t room here to detail every single specification and also features of both phones and this is where some feel the Samsung Galaxy S4 pushes ahead. As well as wireless charging (some markets) the Galaxy S4 has some amazing new features and improvements such as Smart Stay, Smart Scroll and Smart Pause and further enhancements to S Voice.

Design and build may also play a part in any decision you make between these two handset and on a personal level we’d say the Xperia Z wins this hands down with an elegant sleek design, top-end materials and all-round premium look and feel whereas once more the new Galaxy S handset features plastic and more plastic as on previous Galaxy S phones. Pricing for the Galaxy S4 is only just being announced in dribs and drabs for different regions and carriers but it likely to be around the same price as the Xperia Z or maybe just slightly more.

We say that both of these phones have a huge amount to offer consumers. Although the Galaxy S4 will undoubtedly become the bigger seller (such is the dominance of Samsung for Android devices) that doesn’t mean the Xperia Z doesn’t more than live up to its billing of being Sony’s flagship device. Both phones will offer users a fine mobile experience and should keep users satisfied and happy with their choice. If innovative features are important to you then the Galaxy S4 might be the right choice for you. However, if you want a good-looking phone that looks and feels good the Xperia Z may suit you better.

We’d like to hear your thoughts on these two smartphones. If you were to choose between the Samsung Galaxy S4 and the Sony Xperia Z right now, which would you opt for and why? Let us know with your comments.