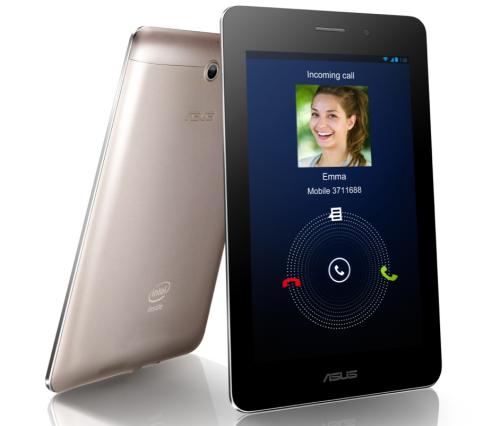 We are getting used to seeing smartphones increasing in size to offer an experience closer to that of a tablet PC, but the reverse is also happening with tablet devices that can now make and receive voice calls. We now have news of one such device the Asus FonePad that has been given a UK price and release date with imminent pre-orders.

We first heard of the device back in February at MWC 2013 event before last month there was speculation the slate would be coming to the UK this month. Now it has been confirmed that pre-orders for the device will begin on April 12th at Amazon, Carphone Warehouse, and Sainsbury’s.

The device is expected to begin shipping on April 26th and will only cost consumers Â£179.99, which will put the new tablet PC up against the Nexus 7 that is also made by Asus. The device like the Samsung Galaxy Note 8.0 will allow owners to make and receive calls along with SMS messages.

While you may feel a little weird holding a device as big as this next to your ear, it could still be a handy feature for some users to have. The Asus FonePad is also a lot cheaper when compared to the Samsung Galaxy Note 8.0 and offers quite a lot of specs for your hard earned cash.

The device features a 7-inch HD touchscreen display with a resolution of 1280 x 800 that is powered by an Intel Atom Z2420 processor running at 1.2GHz paired with 1GB of RAM. There is 16GB of on board storage and unlike the Nexus 7 this is expandable further via a microSD card, 3.2-megapixel rear camera, 1.2-megapixel front camera, Android 4.1.2 Jelly Bean, and a 4270 mAh battery pack that is claimed to provide up to 10 hours of HD video playback, or over 32 hours of 3G talk time.

Will you be getting the Asus FonePad?