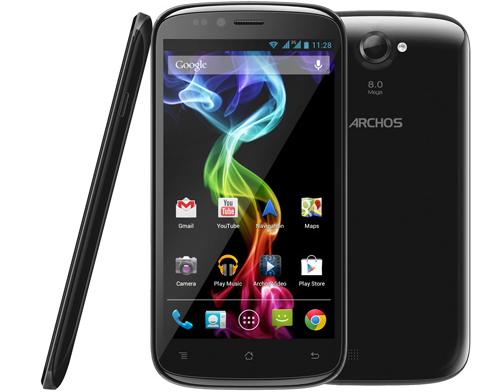 The Android platform is now awash with cheaper handsets that still offer some worthy specifications, and this choice is about to get even more complicated as the Archos Platinum and Carbon handsets have been announced that bring stock Android on the cheap.

Archos are better known for their affordable tablet devices but now the company has joined the already crowded smartphone market with the launch of three Android smartphones. The company has mentioned the devices will initially launch in Europe next month with pricing starting at only Â£79.99.

The range starts off with the entry level 35 Carbon that features a 3.5 touchscreen display with a resolution of 320 x 480 powered by a single core Qualcomm Snapdragon S1 processor clocked at 1GHz. There is also 512MB of RAM, twin VGA cameras, 4GB of expandable storage, and a 1,300 mAh battery running the Android Ice Cream Sandwich operating system.

Next up is the 50 Platinum that has a qHD IPS 5-inch display with a resolution of 960 x 540 powered by the quad core Qualcomm 8225Q processor clocked at 1.2GHz with 1GB of RAM. There is again 4GB of expandable storage via microSD card, 8-megapixel rear camera, 2-megapixel front facer, 2,000 mAh battery, and the Android 4.1.2 Jelly Bean operating system with this costing Â£179.99.

The 53 Platinum uses a 5.3-inch touchscreen display and has the same specifications as the 50 Platinum except it has a 2,800 mAh battery and costs Â£199.99. All three handsets have dual SIM support and use a stock version of the Android OS so will appeal to those that can’t afford the Nexus 4.