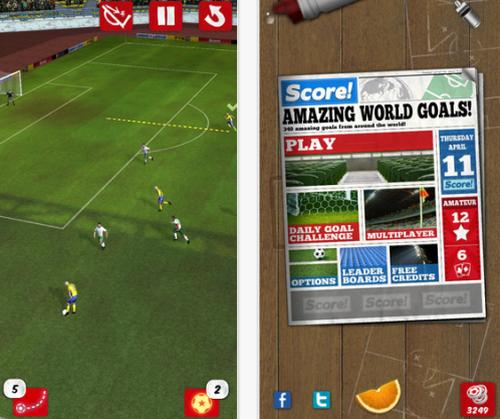 While the Football season may be drawing to a close in many European countries with various teams getting their hands on that silverware, gamers can still get their footy fix with the various mobile games that are available, and today we have the news that Score World Goals for iOS sees massive a update.

This free game is brought to you by UK based First Touch Games, and the company has just announced it’s biggest ever update for owners of the iPhone, iPod Touch, and iPad. So far over nine million users have downloaded the game with this latest update bringing improvements to the graphics and gameplay.

The game is a football themed puzzle that allows players to recreate those classic goals from years gone by, and the update brings a new turn based multiplayer mode via Game Center. Other new additions are the Daily Goal Challenge with global player rankings, and users can post their achievements to Facebook and Twitter.

New goal packs have been promised to be added on a regular basis, while the game uses an advanced 3D graphics engine that uses full motion capture along with artificial intelligence that reacts to passes and shots.

The game has received some great reviews from users of this free title and is available globally via the App Store for owners of the iPhone, iPod Touch, and iPad running iOS 5.0 or later.