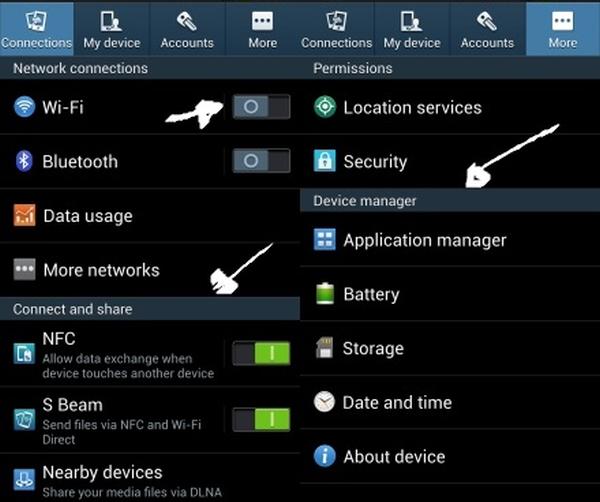 The Samsung Galaxy S4 has now started to arrive on consumers door steps in what will be one of the biggest new smartphone launches of this year, but it seems already that the Galaxy S4 is experiencing some screen issues and smearing affecting some owner’s handsets.

When a new smartphone is released we can quite often hear about a few minor issues or bugs that can be affecting some examples of the device, and this is certainly the case with the Samsung Galaxy S4 as a growing XDA Developers thread that was started on April 27th has many owners reporting a problem with the handsets display. The image on this page was provided by the user that originally started the thread with the areas worst affected highlighted.

If a user is scrolling through content using a relatively black screen there is a smearing of the display, and there is also a purple tint to the letters on the display. At the time of writing the thread has quickly grown to 30 pages long with owners giving a number of possible causes with some suggestions it’s the firmware as the problem didn’t exist before a recent update for some users.

Others are suggesting it’s a problem with the screen itself but it doesn’t seem to be affecting all owners of the handset, and a video of the problem has also emerged that we have embedded for you below this article.

Both versions of the Galaxy S4 have been reported with the problem and the issue seems to get worse when the display brightness gets turned down further. Many have compared the problem to owning a cheap LCD TV that has bad motion blurring and smearing.

Check out the video below and tell us if you have noticed any issues with your Samsung Galaxy S4 display.