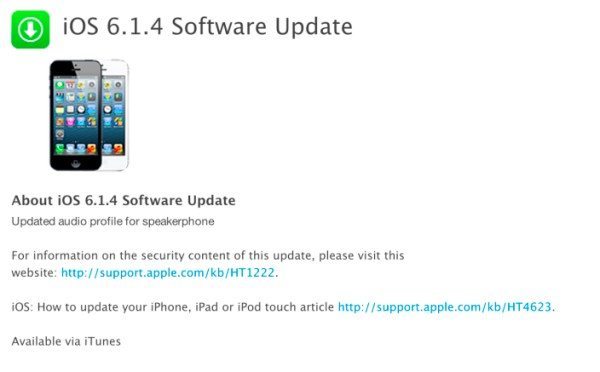 We always try to give information about operating system updates and if you have an iOS device you may have heard about the iOS 4.1.2 update that has just been released. This iOS 6.1.4 update is specifically for the iPhone 5 though and there is a certain amount of intrigue about what seems to be a rather ineffectual change to the audio profile.

If you have an iPhone 5 you should receive notification of this 11.5MB OTA (over the air) update and many of you will already have installed it. What is quite unusual though is just how minor the update is as it appears the only change is an ‘updated audio profile for speakerphone,’ which is hardly anything to get excited about. In fact plenty of iPhone 5 users may decide it’s not worth bothering with it.

However Viral Phone has come up with a rather interesting theory that although Apple’s notification simply says it’s for the above negligible change, there may in fact be more to it. The team there have downloaded and installed the update and found no discernible difference. Although it’s possible that it’s for the benefit of enhanced sound for those that you call rather than the caller themselves, Viral Phone also called people and asked if they could hear any improvement and no change was noted. Therefore it’s suggested that perhaps Apple has quietly sneaked in some security patches.

An excellent point is also made that if this is only for a slight audio alteration then it seems too large an update at 11.5MB. This could be the last update before we see the introduction of iOS 7 and of course if you have a jailbroken iPhone 5 you should avoid installing it anyway.

We’re very interested in this and so we’d really like to hear what you think about the update. Have you already installed 4.1.2 on your iPhone 5? If so, have you noticed any perceptible difference? Maybe you’re also wondering exactly why Apple has issued this update? Let us know with your comments.

3 thoughts on “iPhone 5 iOS 6.1.4 update and intrigue over ineffectual change”