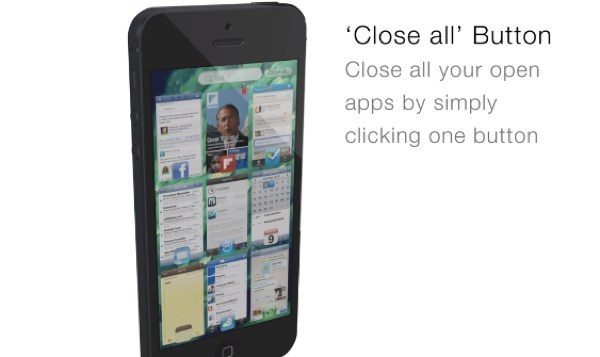 If you follow Apple news and are an iPhone enthusiast then you are probably very interested in iOS 7, the next major upgrade to Apple’s mobile operating system. It’s anticipated that iOS 7 will be introduced at Apple’s WWDC in June and while we wait we have another designer’s video idea for multitasking support that we think many would like to see implemented by Apple and shows a spot of brilliance.

Sometimes we take a look at concept designs for new smartphones and operating system improvements to get some impression of what we might see on the real deals and this latest iOS 7 design comes hot on the heels of another iOS 7 concept that we showed you at the weekend that we felt showed some really innovative features.

This new design comes from Ran Avni and it wasn’t too long ago that we showed you his concept for the iPhone 6. This latest envisioning specifically regards multitasking on iOS 7 and we think Avni has come up with another winning idea. Whereas at the moment iOS only enables particular tasks to run behind the scenes this designer concept shows more flexible multitasking support.

You can see this latest iOS 7 concept video below this story that shows enhanced multitasking for controlling open apps on the iPhone. The highlight of the whole idea for us is a ‘Close All’ button that would enable users to close all of their open apps at once with one simple click. This is a great idea and we hope Apple’s Jony Ive and his cohorts may bring this to iOS 7.

Check out the video below and let us know what you think of this latest iOS 7 design concept. Is this multitasking idea something you’d like to see implemented for real on iOS 7? Let us know with your comments.