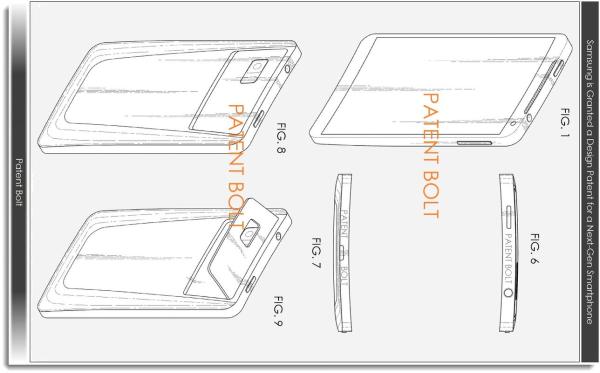 Quite often we report about new patents that emerge from iPhone maker Apple, but that’s not to say other companies are not always coming up with innovative ideas. Today a new Samsung patent hints at a possible curved display on the rumoured Galaxy S4 Zoom device.

A recent patent that has been awarded to Samsung by the US Patent and Trademark Office that shows a device with a slight curve and according to the guys over at Patent Bolt this could be for a next generation smartphone design.

This design is also close to the current Samsung Galaxy Camera but the new design is combining this with a Galaxy S series smartphone, so could be the Samsung Galaxy S4 Zoom we heard about recently.

The description mentions a digital camera but the images that can be seen on this page along with others that can be seen via the link above, clearly show a device that resembles a smartphone but with a larger camera module.

Samsung’s new patent is actually titled as a ‘mobile terminal’ while at the bottom there is a note stating ‘mobile phone’. There seems to be some kind of flip out feature for the camera on the rear that could be a shade for the lens for when using out in bright sunlight conditions.

As always companies get many patents granted to them that never see the light of day with commercial products released to the masses, but previously we heard that Samsung is supposedly unveiling three new versions of the Galaxy S4 by the end of this month so we may soon see if these handsets feature a curved display.