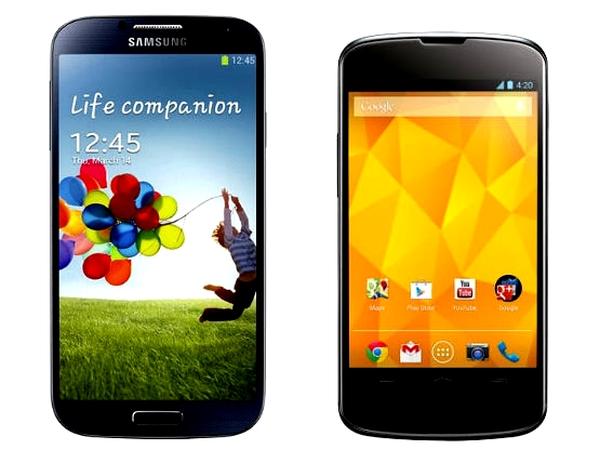 The smartphone world offers users a huge choice of different devices that can become bewildering at times, but if you prefer a vanilla Android experience your choice is more limited. Today though we are looking at the recently announced Google Galaxy S4 vs LG Nexus 4 in a stock Android battle.

Rumours emerged shortly before yesterdays Google I/O keynote speech of a Google version of the Galaxy S4 that was then confirmed a few hours later, and now in a few weeks time some consumers will get access to the new version of the handset, but how does it compare to the already available LG Nexus 4?

Power and Storage
The Nexus 4 comes with either 8GB or 16GB of non-expandable storage with 2GB of RAM while the Google Galaxy S4 will have 16GB of internal storage that can be expanded by another 64GB via a microSD card along with 2GB of RAM.

Cameras
The Samsung Galaxy S4 comes with a 13-megapixel rear facing camera coupled with a 2-megapixel front facer, and the handset has a whole host of new camera software features that have been added by the company. On the Nexus 4 there is an 8-megapixel rear facer along with a 1.3-megapixel unit on the front.

Pricing
Google announced that the Galaxy S4 will be available in the US from June 26th via Google Play and priced at $649 unlocked, while the 16GB version of the Nexus 4 comes in at $349 and the 8GB version is $299.

For the time being at least the Galaxy S4 will only be available in the US and for AT&T and T-Mobile users, but the company has promised to provide prompt updates on a device that also has an unlocked bootloader, which went down well with the watching audience.

It may be a little unfair comparing these two handsets considering the Nexus 4 came out last year, and we all know how quickly things change spec wise in the smartphone world but the new S4 is likely to attract a lot of attention from consumers as the device will also support LTE connectivity.

Do you fancy the Google version of the Galaxy S4?