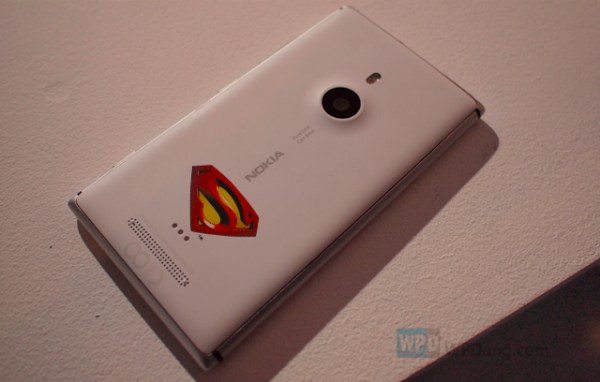 If you’re a fan of Nokia Lumia smartphones and also have a passion for Superman then we can tell you about a phone that could be just right for you. Nokia is about to release a Superman-branded Lumia 925 Windows Phone handset and although it looks likely to release in China first we imagine it will also come to other markets.

The phone will release in China on June 15, the day after the Man of Steel movie lands on screens across the country and will be available as part of a limited edition of only 925 to tie in with the name of course. The Nokia Lumia 925 Superman Limited Edition features the Superman logo on the back of the device and this also appears on a wireless charging cover accessory that can be purchased separately when the special edition phone releases.

Some of you may remember that last year Nokia launched a unique Lumia 900 using the Batman theme and it looks as though that must have been successful enough to nudge the company into trying the idea again. The internals of the hardware are exactly the same as the standard Lumia 925 smartphone but it looks likely that the new Man of Steel Windows Phone 8 app may be already installed on this limited edition version. This app will be a Nokia Lumia exclusive and after completing various challenges some exclusive content will be accessible to unlock.

In China the price of the Nokia Lumia 925 will be CNY 3,999 that’s around $652 or Â£432. The Superman Lumia 925 has not yet been detailed for price and release in other regions but as we said at the start of this article, we’d be surprised if it doesn’t also become available in other countries outside China.

Would you be interested in purchasing this special Superman Lumia 925 if it released in your region? What other superhero branding would you like to see on devices? Let us know with your comments.