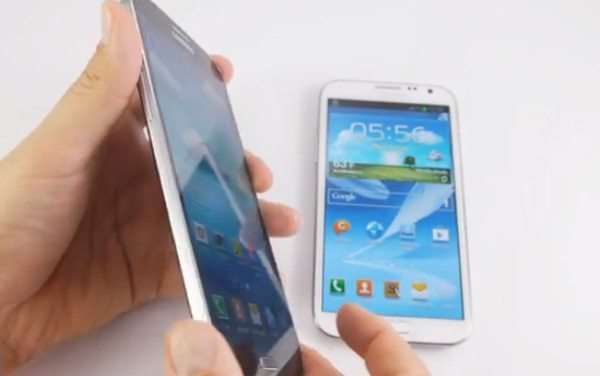 The Samsung Galaxy Note 2 has achieved a lot of success for the company as its flagship phablet type of smartphone. The Note 2 released last year, but now there is a new phablet-style entry by Samsung, the Galaxy Mega 6.3. Therefore, it could be a problem deciding which might suit you best. Today we have details for you of a comprehensive video comparison of the Samsung Galaxy Note 2 vs. Mega 6.3.

Many Android enthusiasts who favor a larger display on their devices rave over the Galaxy Note 2, and rightly so as it’s a great handset. However, the new Mega 6.3 has an even larger display, which could make it more appealing to some smartphone users. We’ll start with a look at the key specs of each before moving on to the video.

The Samsung Galaxy Note 2 is powered by a 1.6GHz Exynos quad-core processor, has Mali-400MP graphics, and a 5.5-inch Super AMOLED display with resolution of 1280 x 720 and 267 ppi. It also has 2GB of RAM with 16, 32 or 64GB of internal storage, expandable via microSD. You can add to this an 8-megapixel rear camera with 1080p video capture, a 1.9-megapixel front-facing shooter, 3100 mAh battery, LTE and S Pen stylus. It runs the Android 4.1.2 Jelly Bean operating system.

The Samsung Galaxy Mega 6.3 on the other hand, totes a 1.7GHz Qualcomm Snapdragon 400 dual-core processor with Adreno 305 graphics and a massive 6.3-inch display with 1280 x 720 resolution and 233 ppi. It has 1.5GB of RAM and 8 or 16GB of internal storage (expandable via micro SD), as well as an 8-megapixel rear camera and 1.9-megapixel front-facing shooter. The Mega 6.3 carries a 3200 mAh battery, LTE and runs Android Jelly Bean 4.2 but has no built-in stylus. 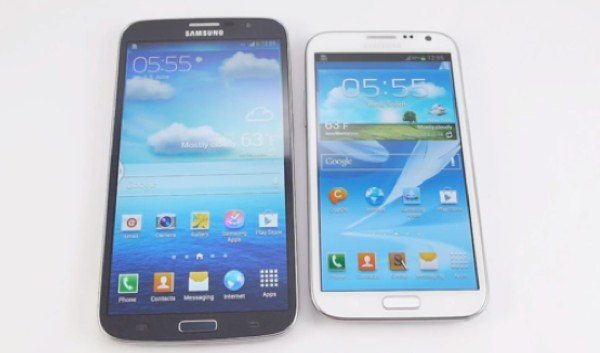 There are plenty more specs and features that could affect your choice of course, but both of these are notable smartphones. The 8-minute video that we’ve embedded for you below this story does a great job of contrasting these handsets. It’s interesting to note that when the Galaxy Note line was introduced we thought it seemed too large and wondered if phones that size would ever catch on. Now though, as you can see from the image above showing the Galaxy Mega 6.3 on the left and Note 2 on the right, the Note 2 phone looks positively small next to the larger Mega 6.3.

The video looks at the form factors of the Galaxy Note 2 and Mega 6.3 and then goes on to look at the displays, user interfaces, features, processors, benchmark results, performance, cameras and more. We think choosing a smartphone is very much a personal preference, although the conclusion of this video from Phone Arena says that the choice of the Galaxy Note 2 is a “no-brainer” over the Mega 6.3, thanks to it being more compact and easier to handle, the stylus inclusion, more internal storage, lower price and camera performance.

We’re sure that some will disagree with this though, as different phones suit different people, and it’s also worth remembering that we are expecting the arrival of the Galaxy Note 3 later this year. You may also be interested in our recent post showing the Galaxy Note 2 and Galaxy Mega 5.8 in a video.