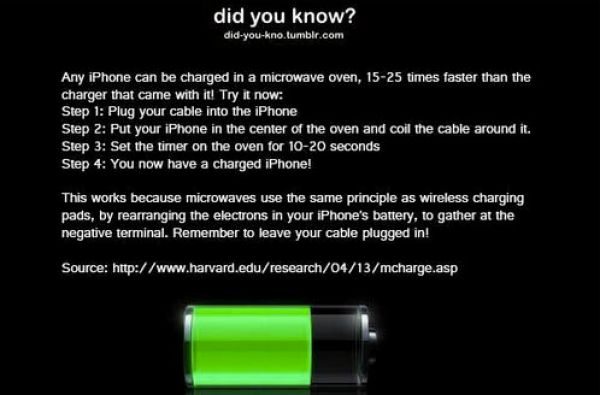 It seems people can be really silly, we are not ridiculing any certain person here but everyone seems to be searching for “Charge iPhone in Microwave’ again. Now call me sceptical but come on, do you really think you can charge your smartphone in a microwave?

We thought we would let Phones Review readers hear about a new hoax trending all over the social networks such as Twitter, Facebook and Tumblr. Now we said it is silly and will not work, and no we are not going to test this theory, but this has started a new trend with many commenters’ on forums and answer sites saying, “Yes it does work.”

Looking at the pictures below is a new hoax spreading fast, the graphic looks official and by placing your iPhone in the microwave for about 15 to 20 seconds will give the handset a full charge (DO NOT TRY THIS — Phones Review WILL NOT be held responsible for your actions). 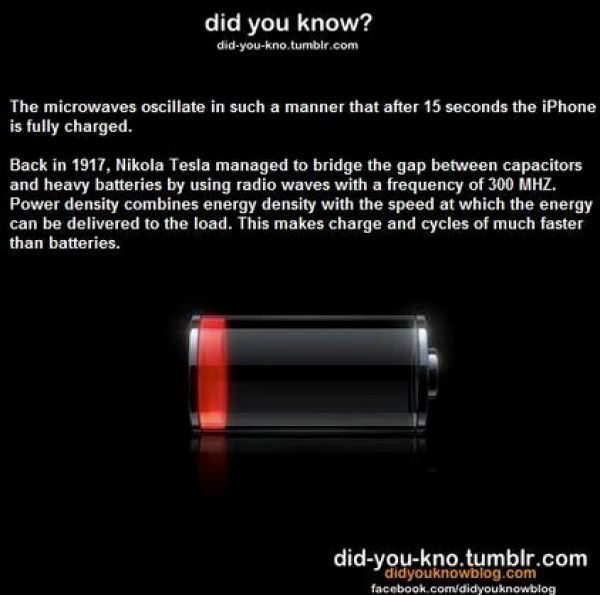 We all know by placing devices such as the iPhone in a microwave for a few seconds will result in meltdown, it will be fried.

What The People Are Saying
We will not mention any names, but certain Q&A sites are talking about charging an iPhone in the microwave, and some of the answers are incredible. Now we are not scientists and will never try this, but one commenter said it would work because the microwaves inside oscillate after the time mentioned above and the electrons in the iPhone battery moves to the negative pole resulting in a full charge.

It gets even crazier when one commenter said, “Ignore the other answers because apple pay people to say it doesn’t because they will lose charger sales.”

The Videos
Below you will see a few videos, these are very old but we could not resist showing them to you. Once again do not try this because its madness. If you look at the first video you notice how he covered the whole microwave by standing in front of it when getting the iPhone out, got to laugh.

In the second video, which was done 4 days ago they panic a little after the iPhone 5 starts to smoke.

The Question
Do you really think you can charge an iPhone in a microwave?