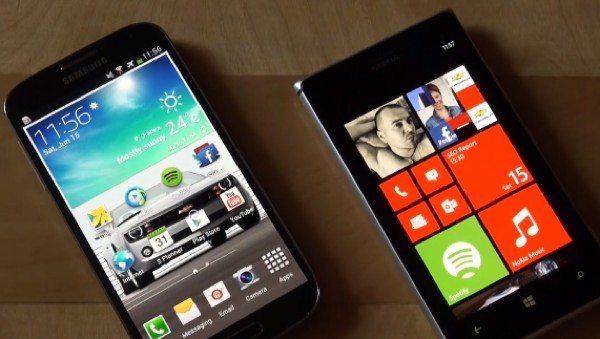 Before you view the video we’ll give you a rundown of some of the major specs of each device so that you have that in mind when you watch. The Samsung Galaxy S4 is powered by either a 1.9GHz Qualcomm Snapdragon 600 quad-core processor or a 1.6GHz Exynos Octa-core processor (dependent on region). It also has a 5-inch Super AMOLED display with 1920 x 1080 resolution and 441 ppi, as well as 2GB of RAM and either 16, 32 or 64GBs of internal memory (expandable via microSD). On top of all that there’s a 13-megapixel rear camera, 2-megapixel front-facing camera, LTE, and a removable 2600 mAh battery. The operating system used is the latest Android 4.2.2 Jelly Bean overlaid with Samsung’s TouchWiz UI.

Turning our attention to the Nokia Lumia 925 this has a 1.5GHz Qualcomm Snapdragon dual-core processor, a 4.5-inch display with resolution of 1280 x 768 and 332 ppi, 1GB of RAM and 16GB of internal storage (or 32GB on Vodafone UK) that is non-expandable. It also sports an 8-megapixel rear camera with PureView technology, a 1.3-megapixel front-facing camera, LTE, a 2000 mAh battery (non-removable), and it runs the Microsoft Windows Phone 8 OS.

On the face of it there’s a clear winner on specs as the Samsung Galaxy S4 has a quad-core processor, removable battery, expandable internal storage, and full HD display to say the least. As we know though, specs aren’t everything and some people will make a choice because of their preference of operating system, which design they favor or because of what they will most use the phone for.

The YouTube video that we’ve embedded for you below this story is almost 7-minutes long and gives an interesting perspective of these two phones against each other. It goes into the hardware, user experience and software, and cameras of the Galaxy S4 and Lumia 925 and concludes that these are probably the best smartphones available on either the Android or Windows Phone platforms (although that is always open to debate). Ultimately the choice should be based on not just the specs and features then, but on which operating system is favored by the potential purchaser.

We always appreciate hearing your comments so why not check out the video below this story and then head back to us to let us know your thoughts. Of the Samsung Galaxy S4 vs. Nokia Lumia 925, which would you choose and why? Is the operating system the most important factor to you?