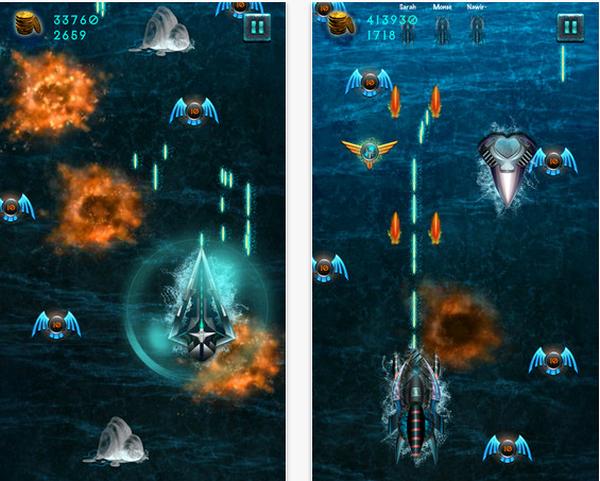 There can be a bewildering amount of games available for mobile devices but luckily a lot of these are available free, so if you find the game isn’t as good as was hoped no money has been wasted. We have a free game for you today that is called Battleship Ocean Islands War for the iPhone, which is a scrolling retro style space shooter.

The game was recently released to the App Store and is a vertical scrolling type of space shooter, which instead of featuring the usual black background it looks more like an ocean hence the name. The ships in the game are bigger than you usual space shooter as well that add more realism to the title.

There is both single and multi player gameplay available with the arcade game allowing players to navigate their space ship horizontally and vertically via direct touch control. Firing is automatic as you progress destroying your enemy while avoiding obstacles, and you can collect coins that will help you get power ups and upgrades to your space ship.

It is a fast paced game with stunning graphics that have been optimized for the Retina display, which are accompanied by some great weapons and engaging sound effects and music. There is Facebook and Twitter connectivity along with Game Center leaderboards and challenges.

Battleship Ocean Islands War is available worldwide free on the App Store for owners of the iPhone, iPod Touch, and iPad running iOS 5.0 or later and check out the demo video we have embedded below.