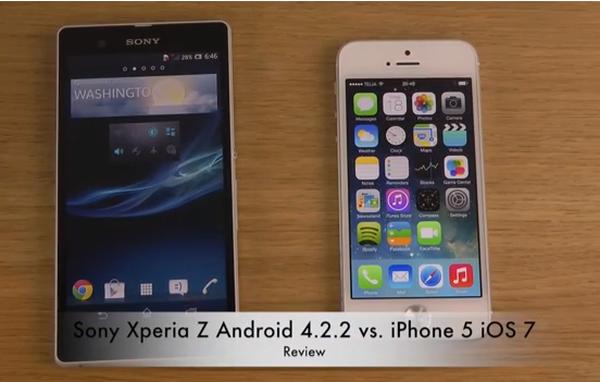 The user experience of high end smartphones can be dependent on the software installed on them, and at the moment both Android and iOS are set to undergo some major changes. Today we have a video to show you that is comparing the Sony Xperia Z vs. iPhone 5 with Android 4.2.2 vs. iOS 7.

We have already given you a video review of the Sony Xperia Z vs. iPhone 5 but the one we have for you today includes the upcoming Android 4.2.2 update for the Sony Xperia Z, which will give us further insight how the two operating systems will compare in the coming months.

The biggest difference is the fact on the Xperia Z you can now have widgets on the lockscreen that can be customized by the user, which can give access to all the apps that, are most used. The video also shows how easy it is to add more toggles for certain settings at the top of the display in a pull down option.

It is also shown how users will be able to get quick access to a number of settings using iOS 7, and goes on to showcase the new features that are coming in the camera app. Multitasking is compared on the two handsets as well as Google Now and Siri.

There have been a number of comments from some people that iOS 7 looks like a poor copy of Android or like a two year old designed it, but these comments are probably from Android users that are not fans of Apple.

Have a look at the video below that is just over eleven minutes long and tell us how you think the two operating systems compare.