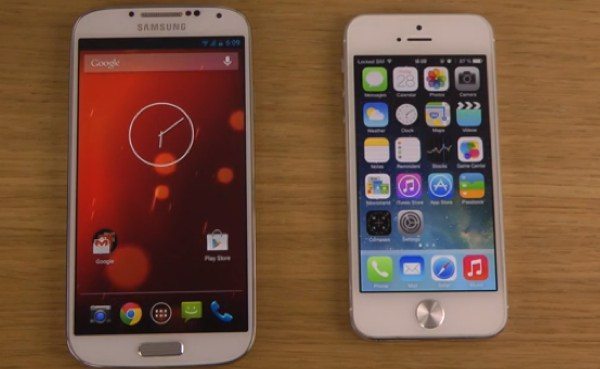 News on updated and upgraded operating systems is coming in thick and fast at the moment. Apple’s iOS 7 was recently debuted and will be publicly released sometime in fall. As well as this, an update to the current Android OS is also on the way, Android 4.3 Jelly Bean. Today we have two videos for you that show Android 4.3 vs. iOS 7 beta 2 on the Galaxy S4 and iPhone 5.

We’ve already posted several video looks at iOS 7 beta 2 including one of the iPhone 4 on Verizon running this OS. Just yesterday we also gave readers a look at Android 4.3 on a Samsung Galaxy S4 after a leaked ROM became available. It’s good to see these two upcoming operating systems up against each other though, as depicted on two YouTube videos.

The first is a Samsung Galaxy S4 Android 4.3 vs. iPhone 5 iOS 7 Beta 2 – Browser Speed Performance Comparison video. This is over 11-minutes long and shows a good comparison between the two and useful features along the way. Ultimately it’s pretty difficult to choose an outright winner on browser performance as both perform better in some areas than with others, but why not check it out to see for yourself.

The second video we have embedded for you below this story is a Samsung Galaxy S4 Android 4.3 vs. iPhone 5 iOS 7 Beta 2 review. This is slightly longer than the first video and is by the same reviewer, expanding further on this interesting battle. It shows other aspects such as settings, apps, toggles, voice assistants and much more, and again, it offers an interesting observation of both operating systems.

Are you waiting for Android 4.3 Jelly Bean or iOS 7 to become officially available? Which operating platform do you favor of these two, and why? Let us know by sending us your comments