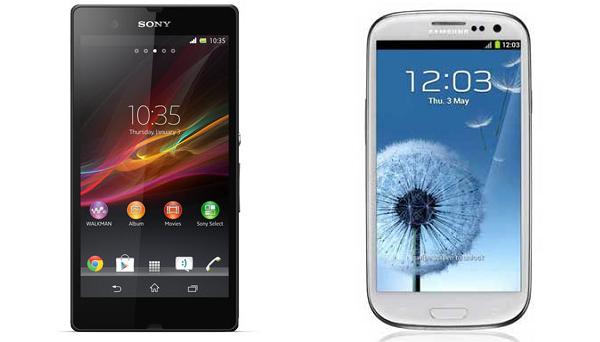 Only a couple of years ago smartphones that featured touchscreen display’s at 4.3-inches were deemed on the large size, but now they feel tiny compared to the handsets now being released especially to the likes of the Note 2 and Xperia Z Ultra.

Display
The new kid on the block features a 6.4-inch Full HD display with a pixel density of 344ppi that compares to the Galaxy Note that has a 5.5-inch display at HD resolution with 267ppi.

Processor and Power
Under the hood of the Galaxy Note 2 is the quad core Exynos 4412 processor running at 1.6GHz with 2GB of RAM, while the Sony has the Qualcomm Snapdragon 800 quad core unit set at 2.2GHz also with 2GB of RAM.

Storage
The Xperia Z Ultra only comes with the option of 16GB of storage with only about 11GB actually available to the user, but there is a microSD slot capable of taking up to 64GB cards, and the Note 2 has 16GB, 32GB, and 64GB storage options that can also be expanded up to 64GB via micro SD.

Operating System
The Samsung Galaxy Note 2 is currently sitting on the Android 4.1.2 Jelly Bean OS and should soon be seeing the 4.2.2 JB update which is the version of Android that the Sony will ship with.

Battery
The Galaxy Note 2 has long been praised for its great battery life from its 3,100 mAh power pack that compares to the 3,000 mAh unit on the Sony.

Sony’s new phablet device does have dust and waterproofing amongst its armoury but you have to wonder how easy it will be to hold in the hand due to its dimensions and squarer form factor, especially compared to the Note 2 with its more rounded build.

Do you think the Sony Xperia Z Ultra is just too big?