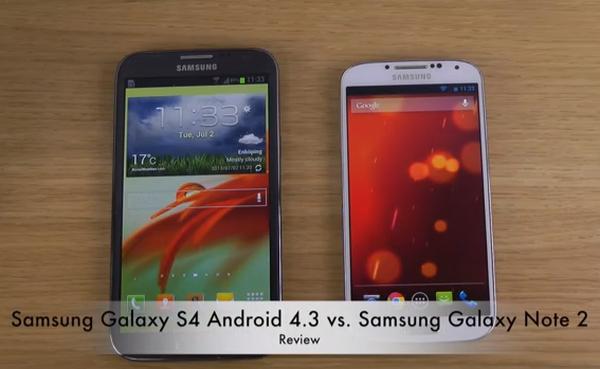 While there has been a lot of focus recently about the upcoming release of the Apple iOS 7 firmware, there is a new version of Android currently being tested with a release expected soon. Today we have a video for you that is looking at the Samsung Galaxy Note vs. S4 wihle running on Android 4.3 Jelly Bean.

The video below this page is comparing a 4G version of the Galaxy Note 2 with a 4G variant of the Galaxy S4. It starts by showing off some of the features on the Note 2 that most people will be pretty much aware of now, and if you want to skip past this bit fast forward to about the 5.30 minute mark.

On the Galaxy S4 is the Android 4.3 Jelly Bean firmware that is obviously a pre-release version of the software, and it soon becomes apparent that the Google Now search bar will always be at the top of the display.

Google Now is demonstrated and at first returns immediate results but then it seems to struggle recognizing the reviewers accent, and when used on the Note 2 the feature returns some surprising results that we won’t spoil for you.

It is soon discovered that Android 4.3 is extremely quick especially scrolling between home screens, and on the lock screen you can add widgets that can give you quick access to things such as the camera, which is something we touched on earlier today regarding changes to Android 4.3.

Compared to the TouchWiz OS on the Note 2 with Android 4.3 you only get a few toggles to choose from to change various settings when swiping down from the top, but on the Note 2 there are a lot more. Of course with the TouchWiz UI there are a number of apps that wouldn’t be available on a stock version of Android, and with the likes of the Note 2 and the S Pen this would be a problem for some users.

We have compared a number of handsets recently and you may be interested in an article we did comparing the Note 2 and S4 cameras against some rival offerings, or our recent article looking at the Galaxy S4 with Android 4.3 against the iPhone 5 on iOS 7.