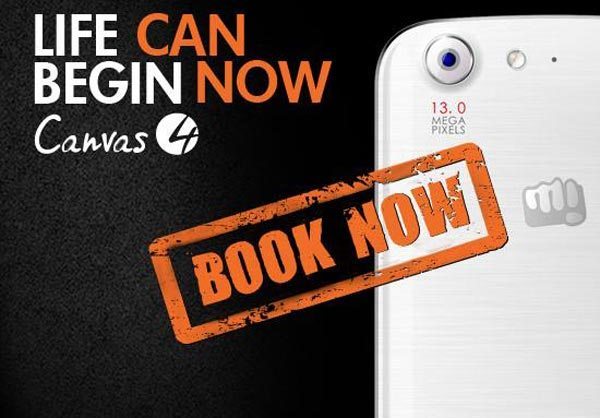 Over the past couple of days we have seen the Micromax Canvas 4 HD specification compared to BLU Life One by a number of people on Facebook. While it is clear to see this smartphone looks like the Micromax Canvas 4 from an external point of view, and also when it comes to specs, we noticed some features that would upset our readers that pre-ordered the new Micromax phone.

The image below this article landed on the official Facebook page within the last hour, and it once again promotes the Micromax Canvas 4 without official specs or even a price. This has resulted in more comments asking for these details and Micromax explaining they will be detailed in full on July 8.

Micromax Canvas 4 camera, battery life and memory — after hearing comments like, “Micromax is selling Blu Life One as Canvas 4 in India” we thought a closer look would be needed. Specs for Blu Life One include 1GB of RAM, a 2000 mAh battery and 720p display. The Micromax Canvas 4 HD would certainly be a disappointment if it featured these specs as well.

Optimism has been high for what the Micromax Canvas 4 specification would be and some people have even risked a pre-order without knowing the final price or full specs. It is true that refunds can be given, but how many people will ask for a refund if the specs included what we mentioned above?

What battery, RAM and display should the Micromax Canvas 4 launch with? We have already looked at the white option available with pre-orders and compared to an expected black version, although will you want a refund if specs fail to deliver? Leave a comment below with your thoughts on the above.