Samsung Galaxy Note 3 vs. HTC One Max with 2 essentials 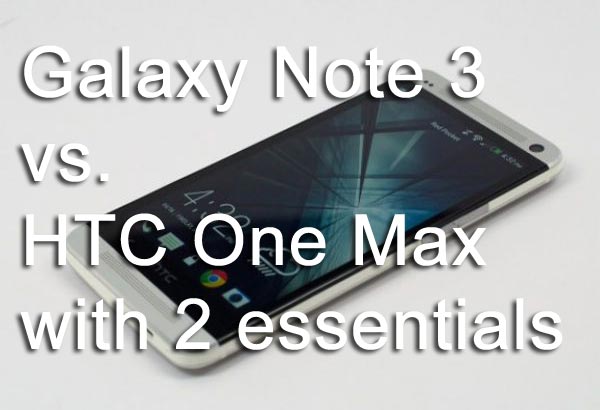 Two phablet type smartphones will be battling it out at some point this year, and these will be the Samsung Galaxy Note 3 and HTC One Max. We know a number of our readers have chosen a brand already, and this might be due to the love for their respected smartphone maker or thanks to an experience they’ve had previously with either brand.

Samsung Galaxy Note 3 vs. HTC One Max — the full official specs and release date for both these devices is yet to land, although we have seen a lot of leaks and rumors painting a clear picture of what to expect.

We took a look at these rumors and the expected specification for each phablet in this article, so feel free to take a look at that information if you want to see how the specs stack up in comparison.

We are not the only ones thinking this change is essential, and a number of our readers have also voiced an interest in seeing these extra features on the HTC One Max. One commenter stated, “Not having a removable battery and SD card are deal breakers”. Another said, “The only thing stopping me from upgrading to HTC is the lack of SD card expansion and removable battery”.

Do you think a 5.9-inch phone in the form of a HTC One Max would be enough to compete with Samsung’s Galaxy Note 3? If not, what specs and features would you like to see on the Max?

36 thoughts on “Samsung Galaxy Note 3 vs. HTC One Max with 2 essentials”