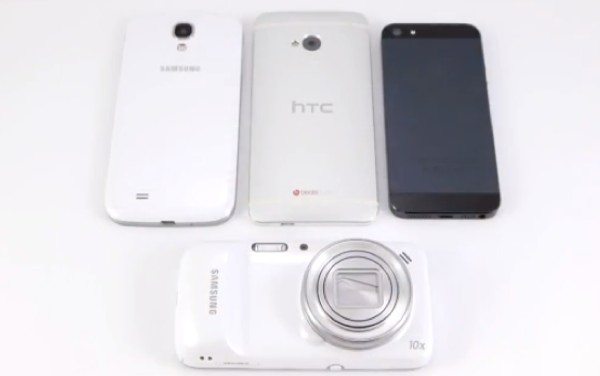 Many of us are now using smartphones as our main cameras rather than having to carry around an extra device. Thus, the camera set-ups on phones are becoming increasingly important with many of the top-end devices having extremely impressive cameras. Today we have a video to share with you that shows the iPhone 5, HTC One, Galaxy S4 and Galaxy S4 Zoom in a camera comparison.

We’ve posted many articles now about all of the above handsets, but to remind you of their individual merits, we’ll give you a brief rundown of the camera set-ups of each before you move on to the video. Firstly the iPhone 5, and this has an 8-megapixel rear camera with autofocus, LED flash, simultaneous HD video and image recording, touch focus, geo-tagging, face detection, panorama and HDR. It has 1080p video capture with video stabilization and also has a 1.2-megapixel front-facing camera.

The HTC One has a 4-megapixel UltraPixel camera with simultaneous HD video and image recording, geo-tagging, face and smile detection and optical image stabilization. It has 1080p video recording with HDR, stereo sound recording and video stabilization and also totes a 2.1-megapixel front-facing camera. If you’re concerned that the 4-megapixel camera looks inferior to other smartphone cameras, then we’ll remind you that this is an UltraPixel camera. This is especially good in low light conditions as each pixel is able to capture 300% more light than the average smartphone sensor.

Finally the Samsung Galaxy S4 Zoom is a camera-centric version of the S4 Mini. The overall specs are not as impressive as the standard S4 then, but the camera set- up consists of a 16-megapixel rear focus with autofocus, Xenon flash, geo-tagging, touch focus, face and smile detection, 10x optical zoom, optical image stabilization, HDR and panorama. It also has 1080p video recording capability along with a 1.9-megapixel front-facing shooter.

It’s impossible to list every single camera spec and feature of these phones here, but hopefully the above has given a general idea of what they each have to offer, and each of them is very capable. The 9-minute YouTube video that we’ve embedded for you to view below this story is an interesting observation of the cameras of these four phones.

The video looks at each of these handsets focusing on the camera performances and runs through some of the camera specs and features to see how the Galaxy S4 Zoom holds up against the others. It shows photo samples from each and discusses detail, colors, exposure, close-ups and more. It then goes on to show low light and night photos, which are notoriously tricky for smartphone cameras, before moving on to video capture.

The video ends with a conclusion on the camera performance of each phone. We won’t spoil the verdicts for you, but the Galaxy S4 Zoom comes out of it well as you would anticipate for a cameraphone, even it if doesn’t quite live up to being the “ultimate.”

We’re interested to hear your thoughts on the Apple iPhone 5, HTC One, Samsung Galaxy S4 and Galaxy S4 Zoom, and particularly their camera set-ups. Maybe you have one of these devices and are more than happy with the camera performance? Perhaps you have been trying to choose a new smartphone and this video has helped you out? Let us know with your comments.