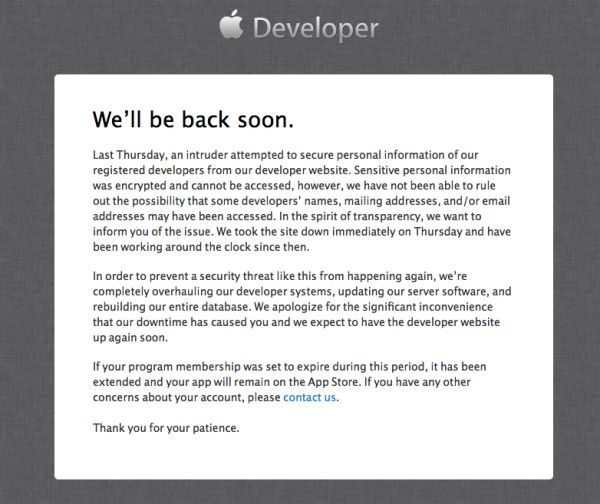 Apple’s iOS developer program is still down after a hacker decided to get into the system to access secure personal information. Apple do stress that even though the personal information was encrypted and impossible to be accessed they cannot rule out that possibilities of mailing addresses, developers names etc may have been entered.

If you visit this Apple page you will still see a message of “We’ll be back soon”, how long developers have to wait is anyone’s guess but we know this could be one of the reasons iOS 7 beta 4 was not released this week. Since Apple’s iOS developer program down time many comments have come in on many websites, one of our own readers said “Since they are completely rebuilding it, does that mean they are going to sort out the UDID bypass? If so I’m going back to 6.1.4.” The question is: Are they really rebuilding or just upping its security?

Over on TechCrunch one commenter named Ibrahim Balic who is a security researcher said something rather interesting, it is rather long so we will break it down talking about the important findings. He said that they have been researching Apple Inc and found 13 bugs that were reported through here, the researcher gave these to Apple and added a few screenshot, which Phones Review cannot show you as we do not have access to them.

A rather interesting bug was one where the researcher accessed user details, which he reported to Apple. He also went on to say that just 4 hours after from his final report Apple developer portal gas closed down and you know it still is and he is waiting on a reply from Apple. After he reported this he seems shocked to be reading about the attack and hack that happened, Balic said he does not want his name blacklisted because all he was doing was reporting bugs as well as collecting data to see how deep he could go with the scope.

The comments over on TechCrunch go on and on questioning Ibrahim Balic; one asked why Balic posted a video on YouTube for public consumption, which has now been removed. They question him by saying it would have been easier if he exercised the vulnerability without taking any data, but Balic said he did not take any data and also said he does not like to be addressed as a hacker when all he was doing was making a security search.

We here at Phones Review will not put the blame on anyone, only Apple will get to the bottom of who the real hacker is, maybe Ibrahim Balic was trying to help by reporting the bugs and security issues, but this will not stop people pointing the finger accusing of him for accessing the system in the first place.

Do you think Ibrahim Balic is the real hacker or do you side with him after what he found?