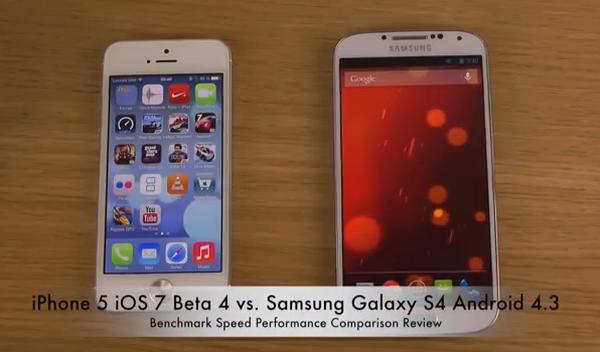 Back in June Apple officially announced the upcoming iOS 7 mobile operating system and have since released various beta’s to developers ahead of a final build being released in the fall. This has allowed us to bring you various videos that is comparing the software running on Apple hardware against rival devices, and today we have the iPhone 5 iOS 7 Beta 4 vs. Galaxy S4 Android 4.3 in a speed test video.

iOS 7 Beta 4 was released to developers yesterday and already we are seeing the software compared against other offerings, and the video below this article has the iPhone 5 with the new version of iOS 7 pitted against the Samsung Galaxy S4 that is running the Android 4.3 Jelly Bean update.

The video is almost 6 minutes long and begins by showing the version of iOS 7 before running a benchmark test using the Geekbench 2 program. The Samsung Galaxy S4 in the video is the quad core Qualcomm version of the handset, and the benchmark score is returned a lot sooner on the device.

We won’t spoil the results for you but there is obviously a lot of difference between the two handsets, and the video then goes on to look at more real world use with a 3D graphic benchmark test.

Two tests are run as it is taken into account that the Samsung Galaxy S4 has a much higher resolution display compared to the iPhone 5, but it seems the app has not been optimized yet for the Android 4.3 Jelly Bean update.

Check out the full video and tell us what you think of the results, and it has to be remembered that the iOS 7 firmware is not the final build so it will probably be improved further before it gets a final release.