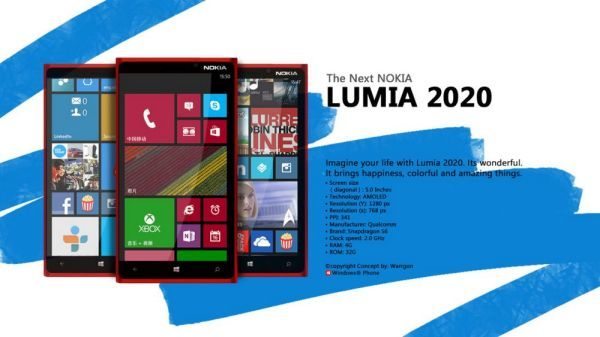 The latest instalment to the Nokia Lumia lineup was the 1020 smartphone, which yes runs Windows Phone operating system. So now we look into the future with the Nokia Lumia 2020 concept and the features it could possibly come with.

Warrgon posted on Deviantart his perception of the Nokia Lumia 2020; this will apparently follow the 1020 that will come with a cool 5-inch display.

Some of the main features on the Nokia Lumia 2020 concept include a 5-inch AMOLED screen, quad core 2 GHz Qualcomm Snapdragon 600 processor, resolution of 1280 x 768 pixels, and a whopping 4 GB of RAM (Dream On), it will also apparently come with 32 GB of storage.

Now we know if this smartphone were to release with 4GB of RAM it will definitely not happen in 2014, so 2105 would be more realistic, but then they could release the Nokia Lumia 2020 next year with 3GB or RAM.

Now Comes Reality Time
If Nokia were to release the Lumia 2020 why on earth would they continue to release all smartphones with Windows Phone OS. You really do need to learn Nokia, you NEED to embrace Android if you want to succeed in life. Nokia is falling like a brick and making no headway in climbing the Apple or Samsung ladder, watch your sales growth once you go over to Android.

Nokia Phones are built with quality; in fact they look rather sexy. It’s just a shame it comes with Windows, make the change whilst you are still in the mobile phone market. You were once the greatest and you could be once again if only you sit back and think.

Do you think the Nokia Lumia 2020 should release with Android OS?