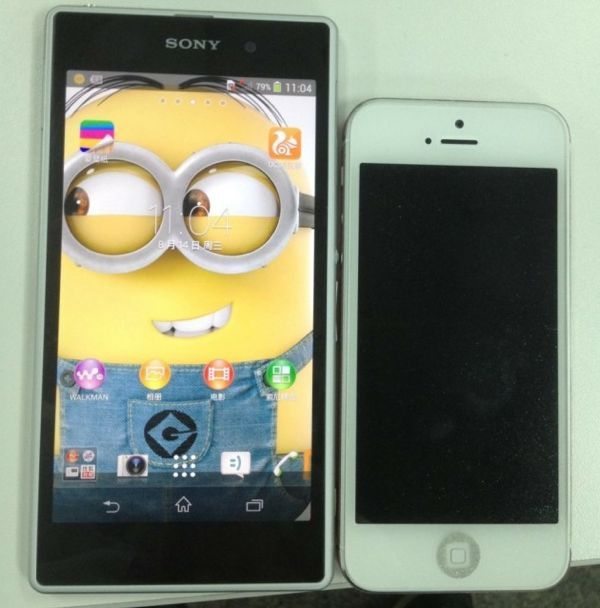 It looks like September 4th will be one busy day for Sony and Samsung, each company will be holding its own event on the same day. A new photo appeared online yesterday of the White Sony Xperia Honami pictured next to iPhone 5 so consumers get an idea of the size difference, and it looks great so far.

The Sony Xperia Honami is said to come packing a 5-inch 1080p display with a huge 20.7MP camera on the rear, so it is safe to say this will be sold as a camera phone considering this is its key feature.

Other key specs are said to include a Snapdragon 800 processor, Adreno 330 GPU, there was also talks of a quad-core Krait 400 CPU and running Android 4.2.2 Jelly bean OS, but we believe it will come running 4.3 considering Sony is starting to update its smart devices.

The 20.7-megapixel camera will have resolution of 5248 x 3936, standard 4:3 aspect ratio and aperture of f/2.0. Like the Xperia Z the Honami will be waterproof as well, and come with Sony’s Xperia UI.

Samsung will be holding its own Unpacked Episode 2 event on September 4th and Sony has already sent out invitations to its event on the same day at IFA, but Sony will hold its event earlier than Samsungs, which means we will learn abut the Sony Xperia Honami before the hopeful Samsung Galaxy Note 3.

Please visit the Xperia Blog for more photos of the White Sony Xperia Honami — Are you interested in Xperia Honami?