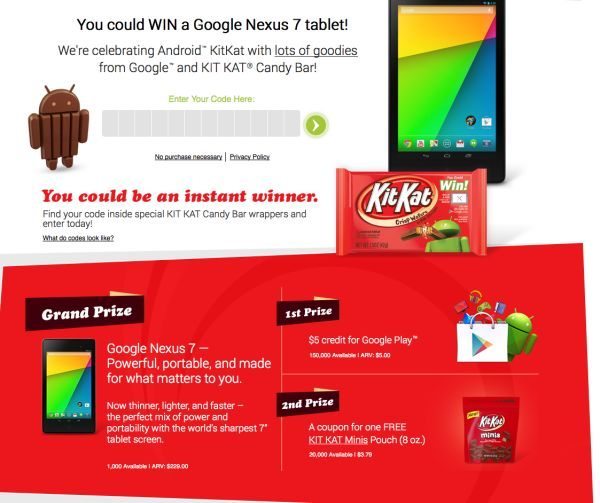 Have a break have a Kit Kat is a well known phrase when it comes to the chocolate brand, and now Android have taken on board the name for its new operating system. Yes it may seem to be an atrocious naming strategy after it was first thought to be called Key Lime Pie but Google is using some clever advertising with Nexus 7 promotions, that could work in favor for both Google and Hershey.

A few days ago we reported about the new Android operating system called KitKat 4.4 and the possibility of it releasing first on the Nexus 5, but we know for sure it will release on all top Nexus devices such as the Nexus 4, 5, 7 and 10.

If you visit the official Hershey website you will see that consumers could now have a chance of winning a Google Nexus 7 tablet, all they have to do is purchase a Kit Kat chocolate bar and check the code inside the wrapper and then enter for a chance to win.

Google is indeed using the KitKat name from Nestle and as far as we know no money has changed hands, instead they will be working together to promote branded Android Kit Kat bars with the Nexus 7 and the Android robot on them.

The new partnership has started a whole new contest where 1000 lucky winners could win a new Nexus 7 2 tablet, 20,000 could win a free bags of KitKat mini bars and 1,50,000 could win $5 Google Play Store credit.

Phones Review would like to say the new Android KitKat name is a little strange, but this will boost chocolate sales across the globe, could you really imagine Key Lime Pie promotions, Kit Kat is clearly more popular than a sweet pie.

Do you like the new name of Android 4.4 KitKat?