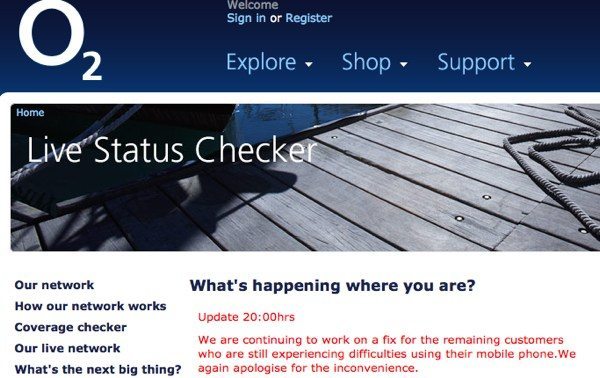 If you’re a UK customer of the O2 network then you may be having problems with your service this evening. O2 is down for some users and this is an issue that has been continuing for some hours now. Social networks are buzzing with talk about the O2 outage, and as yet there’s no timeframe for when the problem will be resolved.

Users are reporting problems on the voice and data network although the issue isn’t affecting everyone’s service. This is now the third time that O2 has been down in 18 months, and understandably some customers are frustrated, angry or upset.

Some users are only having difficulties with data, while others are having problems with texts and calling too. In July last year an O2 outage that lasted for 17 hours or more led to some customers receiving compensation. Further to this there was another outage in October that affected around 10% of O2 customers.

O2 has acknowledged that there are issues with the service and the O2 live status checker was last updated at 8pm. A message simply states that O2 is working on a fix for the customers who are still having difficulties with their phones, implying that the problem has already been fixed for some users that were affected. At the same O2 page customers can check the current O2 signal for their area by selecting whether their issue regards text, voice or data and entering an address or postcode.

Also O2’s Twitter page is being updated with status messages, again acknowledging that some customers are experiencing problems and saying the O2 network team is working flat out on a fix. However Twitter and other social networks are filled with users complaining about yet another O2 outage.

The down time appears to have been affecting some users from around 10am this morning (almost 13 hours ago at the time of writing). The Telegraph says that thousands are having problems with reports of the outage coming in from across the UK including cities such as London, Glasgow, Leeds, Leicester, Liverpool, Manchester, Nottingham, Sheffield and Slough.

It would be interesting to hear how this problem is affecting readers around the UK. If you are an O2 customer having problems today we’d appreciate it if you could let us know the nature of your problem, where you are located and how long you have been without service. Please send your comments to tell us how you feel about yet another O2 outage.

20 thoughts on “O2 down again, frustration and status checker”