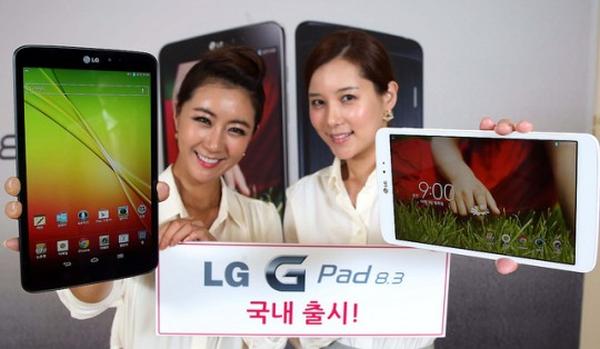 The Android tablet world is an extremely crowded one with numerous devices becoming available at various price levels, and we now have a release date for the LG G Pad 8.3 for Korea before it becomes available globally.

LG took the wraps off its G Pad 8.3 last month and now the company has confirmed that the tablet will be hitting Korea from next week, October 14th in either white or black colour options priced at 550,000 won which is about Â£320/$513, and the device will also reach other markets before the end of the year.

The device is being aimed towards the more premium range of Android tablets with specs to back this up, as the device features 8.3-inch display at a resolution of 1920 x 1200 with a pixel density of 273ppi.

This is powered by the quad core Qualcomm Snapdragon processor clocked at 1.7GHz and paired with 2GB of RAM. There is 16GB of internal storage that is expandable by a further 64GB via microSD card. LG has fitted a 5-megapixel rear facing camera to the slate that has 1080p video recording at 30fps, and around the front is a 1.3-megapixel shooter.

The slate is also bringing the new Q Pair feature that will pair an Android smartphone to the device for network tethering and notifications between the two devices. It will be available in Korea next week from LG’s Best Shop and other retailers across the country.

One thought on “LG G Pad 8.3 release date for Korea, then globally”