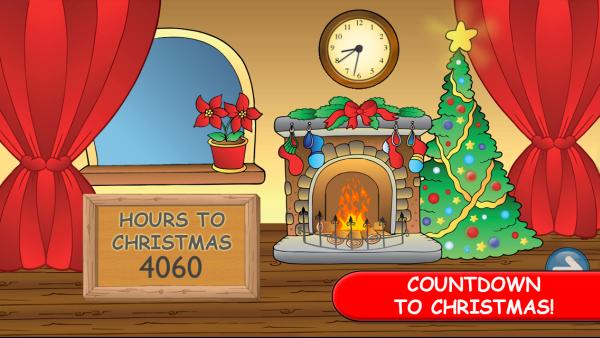 For many people it will be too early to start thinking about Christmas but for many young children or those that want to get the shopping done early thoughts have already started, and to help you get ready for the big day the Christmas Countdown Deluxe Edition app now brings presents following an update.

This iOS app has recently been updated in time for Christmas 2013 and now includes an advent calendar that brings a new present to open each day during December. This comes along with a number of other features that are already available that includes the countdown to Christmas timer, Santa tracker, and a number of free classic seasonal songs.

Many families and children have already enjoyed this free iOS app which will be continued this year as users countdown the hours and days to the big day. The real time clock can also be used as your main clock on your device, and the app features some fluid animations that will make the most of your display.

There are some great snow effects along with a day and night cycle, and this represents the 8th update to the app but this one is the biggest yet and is compatible with the iOS 7 operating system. Christmas Countdown: Deluxe Edition is available worldwide on the App Store for owners of the iPhone, iPad, and iPod Touch running iOS 5 or later.

Have you used this app before?