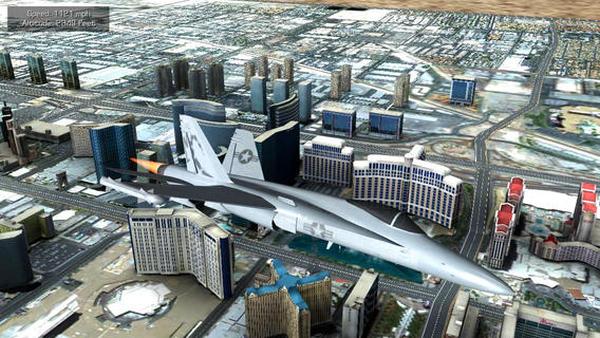 Game wise there are applications that cover almost every genre for mobile users to download that range from freemium offerings or those that require a payment. Today we have news of the Flight Unlimited Las Vegas app that recently received a major update, as you can even land a plane on top of the MGM Grand.

There will be many mobile users that like flight simulator games and Flight Unlimited Las Vegas is brought to your by Los Angeles based Flight Systems LLC, which is obviously set in the city of Las Vegas.

The game has high quality satellite imagery that includes more than 50 accurately recreated Las Vegas hotels and buildings. It will see players fly over such places as the Luxor or trying to land on top of the MGM Grand or the Bellagio.

Players get the chance to take control of 5 different unique aircraft over the 130 square miles of Las Vegas, and even include street traffic such as buses, cars, and trucks that journey around the city. As your aircraft touches down the tires will smoke just like in real life, and even the famous Bellagio fountains spring into life.

The game has already received many positive reviews form those that have already been playing it, and Flight Unlimited Las Vegas can be found on the App Store priced at Â£1.99/$2.99 for owners of the iPhone, iPad, and iPod Touch running iOS 5 or later. There is also a free lite version available that can be tried out before any money is parted with.