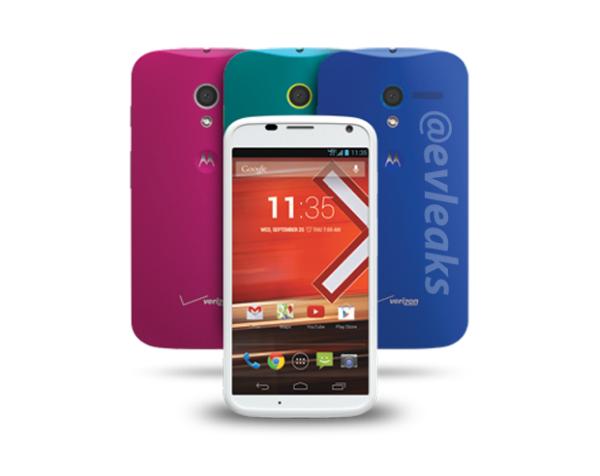 While there will be many people that would love to own the most powerful and feature rich smartphones that are available, there are lots of others that either don’t need or can afford these devices. Luckily smartphone manufacturers now offer a variety of handsets that still have some good specs, and now the upcoming Motorola Moto G says hello before the launch party.

We have been hearing a lot about the upcoming mid range device from Motorola which is set to be officially unveiled next week, but now the image that you can see on this page is a press render leaked by the reliable evleaks that shows the device wearing Verizon Wireless branding.

It is already known that the device is set to be released in the UK as we have had word from a source close to a leading mobile supplier, and also we recently saw some promotional material leaked for Phones 4u with pricing of the handset set to be around the Â£135 mark SIM free.

To recap the device is set to bring consumers a 4.5-inch 720p touchscreen display that is powered by a quad core processor clocked at 1.2GHz running the Android 4.3 Jelly Bean operating system. There will also be a 5-megapixel rear facing camera along with a 1.3-megapixel unit around the front for video conferencing and self-portraits.

Next week we will get to hear all the details about the handset including availability with Verizon Wireless set to offer it as well as at least two UK retailers.

Do you like the look of the Motorola Moto G?