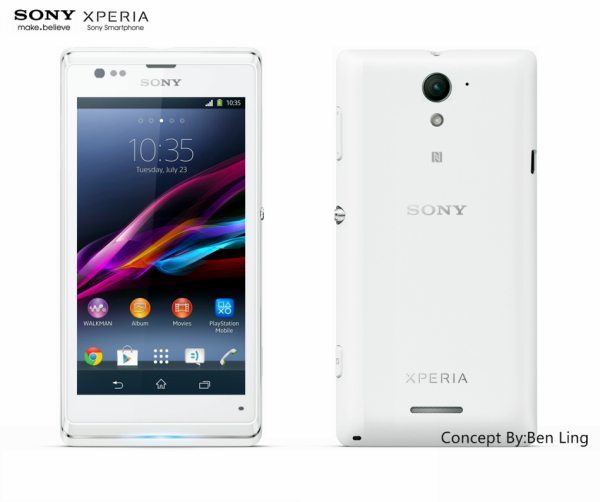 Where can Sony go with new smartphones, lets step back a little from the high-end handsets and take a look at the mid-range Sony Xperia L1 render with pedestrian specs.

We say pedestrian specs because this one is not going past you at fast speeds, but instead mediocre specifications that contains the words “Ok, is that all you got”.

Thanks to Concept Phones they are showing off Ben Ling’s new Sony Xperia L1 render, and even though the specs are not mind blowing they are good enough for a smartphone.

The Sony Xperia L1 concept comes with a 4.3-inch qHD TFT display, 1.3 MP camera on the front with an 8-megapixel on the rear featuring 16x digital zoom, Exmor RS sensor, LED flash and HDR, it can also record in Full HD.

It also has a 1.2 GHz dual core Snapdragon 400 processor, we are not getting exited because even though similar to the Galaxy S4 Mini and HTC One Mini it offers nothing new, and if it has nothing new we are not doing back flips. Other specs include Adreno 300 GPU, PlayStation Certified with X Reality and NFC.

Starting to wonder if this one could go up against the Nexus 5 (Of course it will not, just playing with your mind), the Sony Xperia L1 also comes with 8 GB of storage, 2100 mAh battery, 1 GB of RAM, 4G LTE connectivity, microSD card slot, new speaker design, HD voice, xLOUD tech and runs Android 4.3.1.

Would you be interested in the Sony Xperia L1?