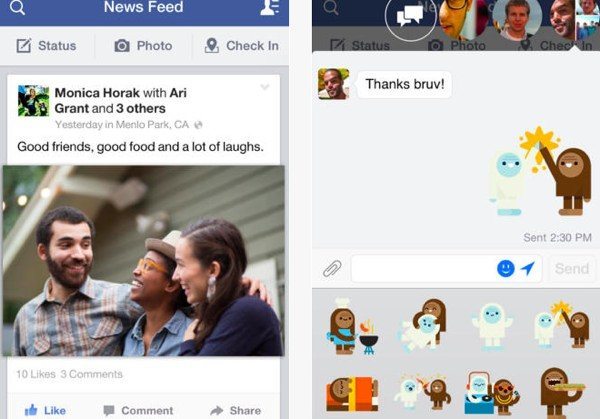 If you’re having issues with the Facebook app for iOS it appears you’re not alone. Many users of the Facebook iOS app are encountering problems since the recent update to version 6.7, as well as further download problems with version 6.7.1 that was issued as a fix.

The native Facebook iOS app was updated to version 6.7 on Thursday and additions and improvements included more languages supported as well as new icons to that users can show their current activities and feelings.

The update also brought iPad Facebook app users the ability to edit posts with a versioned history available. However, very shortly after the update large numbers of users were reporting a pretty drastic crash loop problem.

Following this version 6.7.1 was quickly made available that was supposed to fix the crashing issue. Rather than solving the problem though, this latest update seems to have added further consternation for users.

The changelog for version 6.7.1 simply states that it is for bug fixes, so many people having problems with 6.7 will have been relieved to see 6.7.1 appear. Alas, it now seems that many users are now unable to update to the latest version with an “Unable to Download App” alert thrown up by the App Store app.

As you might expect, many people have taken to Twitter to air their frustration with the Facebook iOS app problems and some people are pretty ticked off to say the least. It’s likely that another update will be issued soon, although at the time of writing we have just checked the App Store and version 6.7.1 is still the latest available.

Some users have found that heading to the App Store app Updates section and hitting “Update All” can result in the app downloading as it’s supposed to. However this fix hasn’t worked for everyone and it’s not clear at this stage if the underlying issue is at Facebook’s end or at Apple’s.

It does seem more likely to be a problem stemming from Facebook though, despite the fact that the iOS app had been more stable over recent months. If this is the case it seems pretty incredible that a company with the resources that Facebook has available, is still signing off app update releases that are clearly not ready.

We’d really like to hear from readers about this issue to get an idea of how widespread it is and if any of you have found ways round the problem. Did you have crash problems after the update of the Facebook iOS app to version 6.7? Have you managed to download and install version 6.7.1 or has that caused you further issues? Let us know with your comments.

8 thoughts on “Facebook app for iOS problems after update”