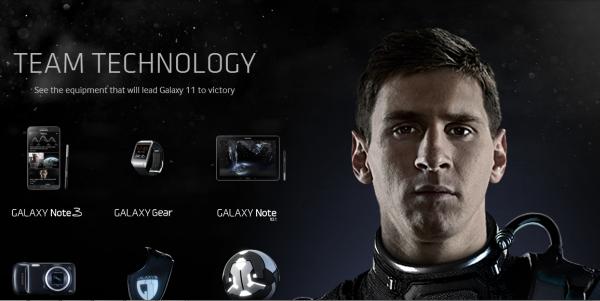 It is not unusual for many large companies to use a number of famous sports stars or other celebrities to help advertise their products or services. Now electronics giant Samsung has been busy kicking off the Galaxy 11 campaign that features the likes of Argentinean football superstar Lionel Messi as we get to see some of the company’s equipment.

The South Korean company has been busy this year releasing a number of high end flagship devices and now its new Galaxy 11 campaign is using some of footballs biggest stars to advertise some of these products.

Samsung’s new advertising campaign sees the likes of the now injured Lionel Messi teaming up with some other players to take on some aliens of all things. The aliens are looking to take over the world but Messi along with other such greats such as German legend Franz Beckenbauer are going to team up to save the human race.

There are going to do this but taking part in an all or nothing football match with the winner taking all. Franz Beckenbauer will be the manager taking control of the players and looking to get the tactics needed to defeat the enemy.

More players are going to be added in the coming weeks and with the star names that are likely to be added the advertising campaign must be costing Samsung millions. The Galaxy 11 team will be using some of Samsung products to help them in their mission to defeat the aliens using things such as the Galaxy Note 3, Galaxy Note 10.1, and Galaxy Gear.

Below this article is the video featuring the Barcelona player and this campaign does offer something different especially as the sport is the biggest in the world with millions of fans, and the company has got off to a good start as even if you don’t support Barcelona or Argentina it’s hard not to like Messi given his undoubted skill.

Hit this link to find out more about Galaxy 11.